Well we've done it. It was a long and tiring journey but we finally have an RV. 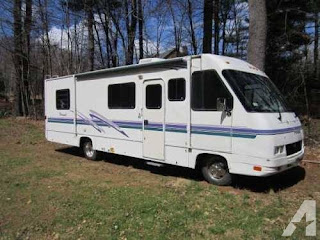 
We flew out bright and early the other day,  the seller picked us up from the airport (Thanks Mr.) Incredibly, Brad purchased our car from this man's son-in-law just 2 years ago -- which we didn't know until we arrived --small world.

He took us to the RV and we went over it, he then drove us to the local DMV and back then we left for home. Within 1/2 an hour of leaving (and ice melting) we had a waterfall on the driver's side.... Yes, the one thing I didn't want was a leaking roof and wouldn't you know it, that is exactly what I got. Not just a drip either, a waterfall. So that needs to be fixed asap and we pray there isn't too much damage from it. The seller told us there was a problem there previously that had been fixed and I have the invoice of that repair, however that doesn't solve our problem.

For the most part is was an uneventful journey which was great, the rig drives comfortably and is surprisingly quiet considering the dog house between the seats. We were able to actually have a normal conversation while driving which was nice. However due to circumstances out of our control (or the rigs) the drivers windshield wash stopped working - it had been working fine but now isn't- and not at the best time either. Using further spray from passing vehicles we managed to get to a gas station and get it washed, we even got away from the wet roads before we got splashed again.

Fortunately, our route took us right past the airport we left from and we were able to grab our car enroute. Going straight to our local mechanic we dropped her off for a safety... I will write a post of how that goes... Cross everything again please.

We have a lot of ideas of what we want to do to her (yes, its a her), new captains chairs, new flooring, paint walls/ceiling, new sofa, new mattress, remove a/c and vent and replace with 2 fantastic fans, (I want to shorten the dinette to make the walkway more open but apparently that will need to be discussed further ;) ), remove extra chair and replace with desk. I'd like to paint the cabinets myself but this will also require further discussion. At the very least we agree to remove all the tacky faux brass.

At the end of the day we wanted a particular layout and that is what we got. The available renovation funds will depend on the safety. As of this moment, while I am not as ecstatic as I would have been without this roof problem, I'm pretty happy. That might change when the safety is done, but while I don't expect it to you just never know. A safety was just done 6 months ago on her, so...

I posted a short video on YouTube of her shadow on the road, still not feeling warm and fuzzy about the YouTube idea but it might be alright if we aren't putting absolutely everything on it. I would like to do the reno on YouTube at least so watch for that.

Brad said it was basically an apartment -which it is, so I'm thinking of maybe calling her 'the condo' since we will be keeping the house it seems fitting. Not really into calling her Mable or Betsy but any suggestions would be great so write them in the comments below.

Next blog: The Safety.
Posted by Gone Rogue at 8:00 am