It was a busy day yesterday, I began the day doing laundry... yes laundry. 2 loads in fact, whew in England that is a feat. Fortunately this washer/dryer combo has a quick wash/dry mode of around 40 minutes, but I remember years ago doing laundry at my Aunt's and the wash cycle alone took 2 hours then it had to be put out on the line to dry. Somewhere in all this Brad has his 'lids lowered' as his brother would say. 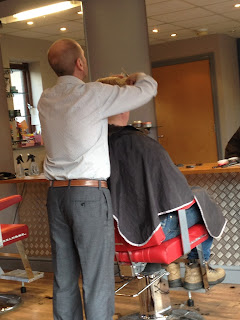 At the Barber Shop

With that done we went for a coffee and hot chocolate in the market square then to Bob & Jane's where we received a message that my Grandmother's ring and my pendant were ready. Brad & I decided to jump the bus and go get them. I took lots of video of the bus ride to give an idea of the speed they go and how close they get to buildings when turning a corner or bend, but I'm having trouble with editing them though I shall figure it out in the end I'm sure and will post a blog of it when I do. 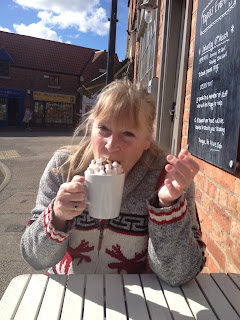 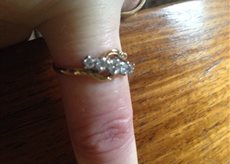 Once we had the jewelry in hand we wandered around the shops of Nottingham for an hour or so to see if I could find a better top for the 50th Anniversary in a few days, no luck there. We went to M&S because, well, thats renowned but unfortunately what they had was straight out of the 60's and 70's. Perhaps its old stock LOL. Surprising to say we didn't find anything there and wandered around the shops to look for some sunglasses for Brad also without luck then hopped the bus home. A return fare was 5lb each. 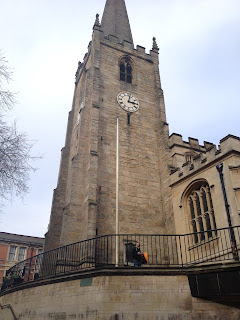 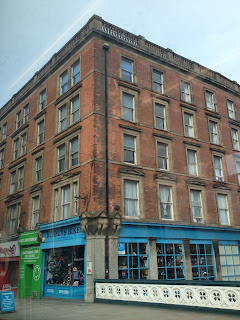 The 4 of us decided to go for East Indian food last night at The Bridge & Bayleaf  in Gunthorpe which is a fantastic restaurant on the edge of a canal where liveaboards and others dock. Although Jane doesn't eat spicy food and apparently Brad shouldn't either (he had a rough night), the 3 of us quite enjoyed some Tandoori and Butter chicken while Jane had Fish & Chips. The atmosphere is so comfortable in this restaurant and the food was phenomenal but Brad found his Tandoori to be quite dry. We had some Stuffed garlic mushrooms as a starter and they were absolutely fantastic. The service was great and the staff was very attentive, anticipating your every need while not hovering or annoying. High praises for this one. I rate it an 8/10 while Brad said 6/10 due to the dry Tandoori. 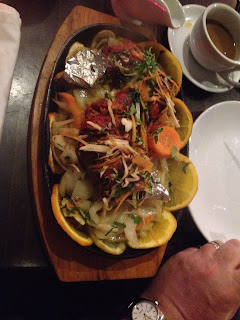 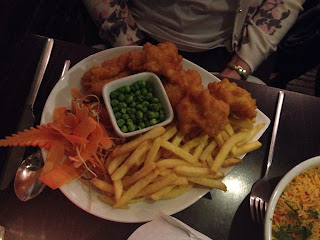 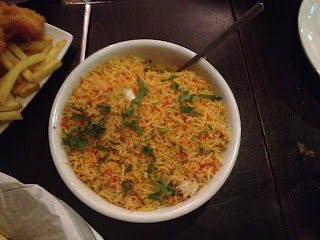 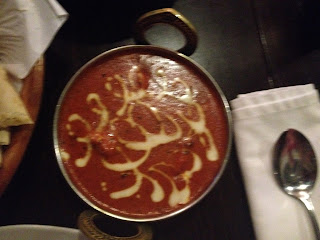 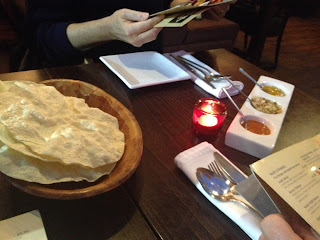 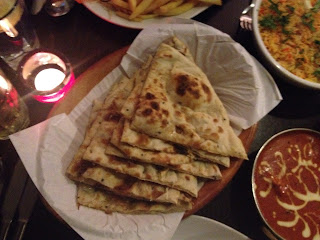 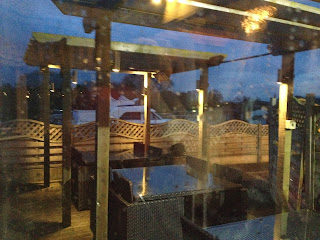 At dusk through a window, but this is a liveaboard as seen from inside, also note the outside seating area.

Then back to Bob & Jane's for a cuppa and chat before heading 'home' for the night.
Posted by Gone Rogue at 2:46 am