Right! So, its exhausting just thinking about all that we did yesterday but I shall try not to fall asleep.

Our day began as any other. A couple of hours in the morning just 'fuffing around' as Bob would say, we had plans to get our rental car a day early (we had it booked for today) and drive to London (from Nottingham) for a Pie 'n Mash lunch with my cousin Paula. We had tried a couple of times to ring Hertz and make arrangements to get the car early but could never get anyone to answer, so as its a car rental company we figured they would have a fleet and getting one early shouldn't pose a problem. HA! We did manage to get it in the end but I'm getting ahead of myself...

After 'fuffing around', I beautified myself and while Brad was getting sorted I tried to Uber us a lift - Nope. Not sure if they don't service this area so far out of Nottingham or if they just truly didn't have a car available in the entire hour I tried to book one. Just as well it turns out.

9am
Finally settled to take the bus and hisself realized he could not find his wallet!!! Tore the house apart looking for it with no luck. Where did he use it last? The other night at the Indian restaurant... Perhaps it fell out on his brother's couch or in his brother's car - so off I go to have a look around at Bob's... nothing. Jane very kindly offered to drive me around to the two restaurants we have been to recently, it was not at the 1st and there were no staff at the 2nd... heading back to town Bob rang to say they had found it. Hisself had gone to the cafe for his morning dose and they advised that some kind soul had found it and handed it in to them. WHEW! It is now stuffed safely in my purse.

10:30am
Wallet found, we quickly pranced off to the bus stop and jumped the red one to Nottingham. Off at Friar Lane from where we would have to walk the rest of the way. Before leaving wifi I had taken a screenshot of the map showing the walk but it was not very detailed and I was taking us off in a wrong direction, so we stopped to ask a woman who promptly began walking us in the direction we needed to go. She spent probably 15 minutes with us and when we were sure we could manage the rest we said our goodbyes - huge Thank You to her and off we went, and went and went. Believing it was at the top of the hill and around the bend I just enquired with a chap at a bus stop as to how much further... we had past it already. Back down the hill, across the park and there it was.

Noonish
They didn't have a car available... then she remembered having made the booking with Brad and fortunately our car was available so we promptly departed and headed off to London, approximately 140 miles (225 km), no worries a little over 2 hours! EXCEPT we had to go right through London proper.... my cousin (bless her heart) had sent me the address for the Pie 'n Mash shop she frequents so that is where the Nav took us and since I'm just a girl (ha ha) I made a few errors on the wonky English roads and it took us what seemed forever, trying to dodge oncoming traffic and double decker busses going at times 10mph (15kph) the traffic was insanity incarnate. We took a wrong turn and wound up outside Buckingham Palace, we crossed a bridge (not the bridge) down by the Eye, we almost ran over jaywalkers and were almost ran over ourselves by more than a few motorbikes... coming from the boonies as we do this was a lot of mental stimulation which was both exhilarating and worrying.

5:30pm
We made it to the Pie 'n Mash shop but had to park on a double yellow line. Trust me, there was no choice. I left Brad in the car, not that he could have moved it had 'the guy' come and ran across the road to get 6 orders (not enough, never enough Pie 'n Mash) which I figured I would just put on the credit card to preserve our dwindling cashflow... Nope, don't take MasterCard but there is a machine down the road and around the corner. Hell No! Ran back to the car and robbed hisself of all his money. Back to the shop and grabbed my order to go. Now Paula must live close by, right Cuz?!

6:30pm
Arrived at Paula's. I'm telling you it was only 19 miles to her house according to the Nav but it took forever because of the atrocious traffic. We enjoyed a lovely supper there and had a great visit that was over far too soon as we absolutely had to get back last night for Bob & Jane's 50th Golden Wedding Anniversary celebration which takes place today. Paula just had her 50th Birthday a couple of weeks ago (March 5th- yes, of course I know your birthday!) so I was able to get some pics with her and her relatively still going balloons for her birthday album. 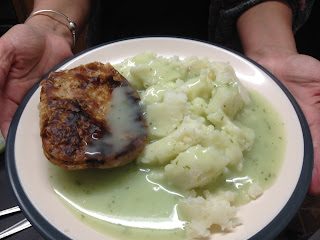 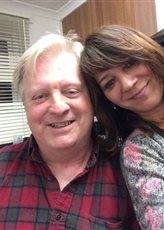 Paula and Brad
(isn't she beautiful?!) 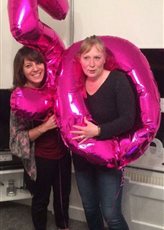 Cousins
(she is older but sure doesn't look it)

8pm
Time to drive back to Nottingham. LB (Paula's son) had checked google maps which said getting to the M1 alone would be 1.5 hrs, however, we managed to do it in 40min. I personally think the traffic fairy thought we had had enough torture for the day and airlifted us out of there LOL. Still though, it was 11pm when we finally arrived back at our little cottage. I sent messages to Paula and Bob letting everyone know we had made it alive and we promptly crashed into bed.

Should anyone out there think you can just drive from Nottingham to London and back in a day... Yes, you can do it. I suggest an earlier start though and you might consider staying the night, although the traffic was definitely lessened in the evening. By lessened I mean more like New York traffic.