I probably will end up doing a long list of Solar posts, but that is not my intention right now. Today, I decided to try to calculate what our solar needs will be and I knew just where to go -Pippi Peterson!

I have been watching RV videos on YouTube for months and months and months now... and while I haven't learned all the details of things like Solar power, Compost toilets or how to clean the tanks, I most definitely know where to go to find it! There have been quite a few YouTubers who have done Solar videos, The More We Explore comes to mind as someone who did a detailed explanation of their Solar install but Pippi Peterson really goes in depth. With spreadsheets and calculations which she explains in such detail that when I wanted to do the calculations that is precisely where I went first.

I made a list of all the electrical appliances which we expect to use in the RV and the Volts, Watts and/or Amps for each. Surprisingly every appliance lists different information, some have the Volts, some the Watts... what a bloody nuisance. Anyway, after a few hours I had managed to convert them into the required DC Amp hours (ah) that I was trying to get to, great! Um. No. My calculation was 5550ah/day... now keep in mind that a typical battery (as per the one Pippi shows in her video) holds 232ah. So we would need something like 25 to 28 batteries... I did something wrong, please tell me I did something wrong...

I did something wrong! I went to each appliance again and rewrote the entire list and the power requirements for each, converted them all to ah again and voila. Success!! My new calculation came out at 1162.50ah/day. Better but... Pippi's video was something crazy like 96ah/day, was that the ballpark I was supposed to be aiming for?

Now when I got the 5550 originally, I just knew something was off so I posted a comment on her video hoping that one of her followers would reply and set me on the right path. To my surprise I got a reply from the Madonna of YouTube herself! She noted in one of her replies that the calculations for her RV were a little over 1000ah/day also and she has an 800ah battery bank. What a relief, I'm in the ballpark after all!

Then I had to make supper. So figuring out what 1162.50ah/day means in terms of panels and converters will have to wait until tomorrow.

Anyone who knows me, knows I have the memory retention of a goldfish so if your not interested in my Solar adventure I'm terribly sorry, but if I just have it on looseleaf paper it'll be gone so some posts will be Solar jibberish until I have it on the roof, which will probably be awhile since we have to gut the RV yet. My posts will not be all about Solar but out of necessity it will be sprinkled in here and there.

Oh yeah, and yesterday I made these potholders for the rig. 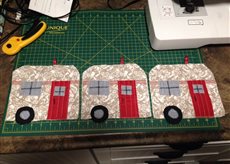