Friday was a slow day around here so I went to the rig and grabbed the old valances. We are not fans of valances but I think there should be something to cover whatever window treatments we end up with so I recovered a small one so we could see what it would look like. That video is here.

Its a very simple and quick makeover. Just remove the staples on the back of the valance, remove old fabric, wrap with new fabric and re-staple.

This is a before pic of the valances 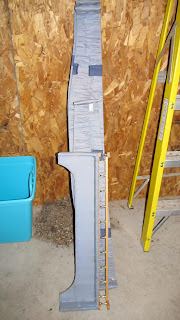 And after with the new fabric. All of the cushions are finished as well. Though I did have issues with the last 3. The first, which I made a video of the other day (here), worked perfectly. When I did the other 3 the next day, they were crooked. By crooked I mean that the edging of the square cushions went from front to back. Pondering what I had done so differently, I realized that for the first one I had attached the two sides and then sewed each side shut but on the second I did one side at a time, not realizing I was starting them on different edges. So I had to remove one side from each and ensure that they were started on the same edge. Voila. 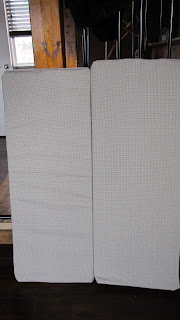 The tripod I had ordered from Amazon arrived Thursday and the new plumbing vent for the RV from Camping World came on Friday. The Fantastic Fans have been in Customs for 4 days now, while the roof itself and its accessory boxes cleared Customs same day.

Remember Brad's tooth issue while we were in England? Well when we got home he went promptly to the Dentist who drilled it to get the roots that the previous Dentist had left in at the top of the root. An appointment was booked for him in the event he would need to get it pulled but that wasn't anticipated.

On Monday, the Dentist's office called to changed Brad's appointment to later which was no problem for Brad. Wednesday, the tooth started acting up again. So an appointment was booked for Friday and they actually phone on Thursday with a cancellation, an appointment which Brad promptly took. The evil tooth was extracted after much ado and a pain prescription written, Brad was in a fair amount of pain which we put down to the effort to extract it from his bone.

But last night he was in a lot of pain and broke out in a sweat, stomach issues and the lot, so it was a late night. Early hours this morning he woke me to say he was going to the hospital, I wanted to go with him but he insisted I stay and sleep. Turns out, he had a reaction to that particular pain prescription. Poor guy.

The ER Doc gave him a new prescription and he returned home where I had a nice bed made up for him on the couch. He sleeps with a CPAP he is not able to wear due to the infection in his cheek, so he is unable to sleep in the bed. The couch allows him to sleep on his side without rolling over.

Hopefully now he is on the mend, but what a time he has had because of this one tooth.