We found a bay and back to work

One of the local guys around here has a workshop about 20min from the house, I managed to reach him this morning to see if we could work on the RV in his shop. No problem he says, but his guys are doing some stuff in there for the next 2-3 weeks. After that, we can move the rig in and get some stuff done.

The weatherman today is calling for freezing rain with more rain tomorrow... I emailed Mark at RVeducation101 because I had read that putting a tarp on an RV was a major NoNo. I didn't think it would matter in our particular circumstance but I just wanted to make sure as there is a lot I don't know... and he's an expert. He confirmed that a tarp in our circumstance would be better than the alternative.

Going online we found a tarp 20' x 30'. Not quite big enough but we'll have to make it work. The bulk of the problem is up front anyway... enroute to buy one I decided to check in at a different store just in case they had a larger one. They did. 20' x 40' for $119 CAD. Perfect, and White - Bonus! At least it won't look quite so bad to the neighbours as if it were green or blue... it blends a little better White.

Before going to pick up Brad from his Masseuse (its Wednesday, remember) Robbie (the dog) and I quickly drove into the Tim Hortons drive-thru to get Brad a hot coffee. My (former) boss pulled in beside me and let me know that the 'problems' at work have been eliminated. Hmmm... Could I? Do I even want to?

Once Brad was firmly entrenched in the car and happy with his coffee I let him know about work. Should I go back? It would be something to do, there's 8 months between now and RVLife but will it interfere with working on the renovation? I decided to stop at the office and talk to them.

We agreed I'd work 2 days a week, Sunday and Monday. My uniforms were still in the office, in the same bag I had returned them in. Just sitting there waiting for me. We all had a laugh that they knew I'd be back so they didn't move them. (I've retired a few times from here already)

Once home we promptly covered up George (that's what I call the RV- short for Georgina. It's a Georgie Boy Pursuit, but the girl version me thinks :)) Unless we get some decent weather in the next while I think we'll just leave her be until we can get her into the bay and accomplish some real stuff. Now with a tarp over her roof and windows I was able to open the windows a crack hoping to dry things out a bit. 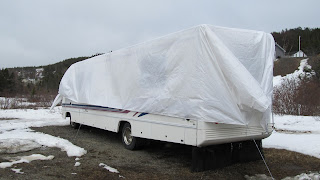 I do have the fabric on order (I went with Sunbrella fabric by the way for camping durability, at least on the dinette and valances) once that arrives (tick tock people) I can putter around doing that until the weather improves or we move her indoors, whichever comes first.

I must say, things are looking warmer up here. The icebergs we had in the backyard a few days ago are gone today. Sorry the pics are through the window with raindrops but I wasn't willing to go out there and take good ones. Its only spring everywhere else.... that blueish blob in the 2nd picture is an iceberg approximately 6' high, or was anyway... gone now :D 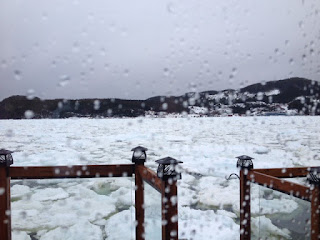 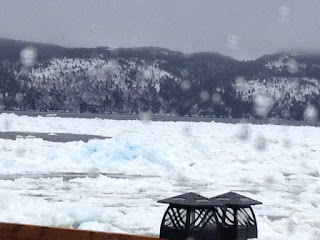