Unfortunately, Brad had a meeting today and so we got to a late start and then he went to his meeting and I borrowed a buddy's truck and went shopping for more roof stuff. Chaaarrrgggeee it! :)

I picked up the 1" x 2" for the roof framing and enough dense foam to re-insulate the entire roof. Also, I grabbed new ceiling boards just in case we had to damage the entire ceiling on the inside in order to fix the outside. With screws and adhesive in tow it was back to the rig I went.

Once I had it all offloaded into the shop I set about tearing the ceiling out above the driver's seat, bathroom and inside the driver's side kitchen cupboards. Of course I had on a full hazmat suit, gloves, mask and goggles. It was a CSI episode for sure, unfortunately because I was alone, I didn't get any pics of my runway model look. Maybe tomorrow - watch for it!

Actually I didn't get many pictures at all. Being 5'4" and without a stool of any sort I couldn't see what was on the other side of what I was tearing apart, so I stuck my camera out through the vent holes and took pictures so that I could make sure of what I was demolishing. Worked great. 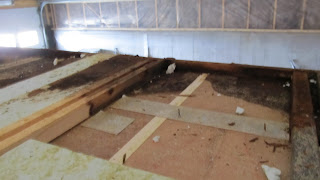 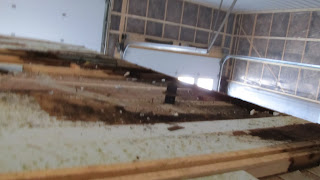 Kitchen through to Bathroom 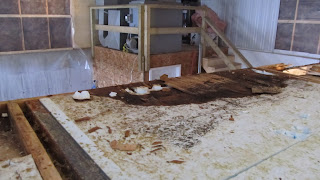 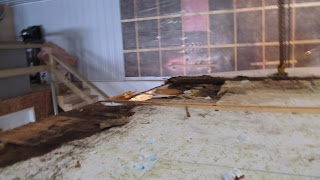 Kitchen through to Driver's seat 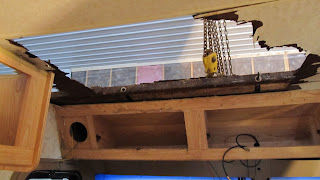 Early on in the removal above Cab


So at the end of the day, literally, I seemed to have learned that the cab roof, driver's wall, above the driver's side kitchen cabinets, and so far at least the bathroom wall behind the sink and possibly behind the shower are saturated. The rest appeared to my tired end of day eyes to be salvageable. Which I think is good news and it will help me sleep tonight, so don't argue.

Tomorrow we will look further into the bathroom shower area and the 1st foot or so of the bedroom behind the shower. Hopefully we can begin rebuilding the roof frame and if absolutely everything goes well, maybe even start the insulation. Likely not but a girl can dream.

I work Sunday and Monday so Brad will be on his own those days. Being the hero that he is I'm sure he'll have it all prepped and ready to stick the EPDM on by Tuesday. No pressure honey, teehee.

Let's face it, this rig is in really bad shape. I won't try to tell you that ditching it and buying a newer one hasn't crossed our minds but even new right off the rack rigs can have problems. So with this one, sure it will be a lot of work but once its finished we will know what we have.

Our bodies are feeling better today, still tender but better. Though by 6pm we are ready to go to bed but struggle to stay awake until a reasonable bedtime hour.