We think we found one

So its been a crazy busy time around here.

I worked Sun and Mon and Brad and our friend are building cribbing to allow us to have land on one corner of the house that will make the deck a complete walk around. We have a few other little things to do before listing her but it will have to wait an extra week or so now.

Yes, we know we planned to put the house on the market in a week but this is something we feel was much needed and we had planned to do it this spring so we are. It will be nice for the new owners (assuming it will sell) which is a big assumption around here. 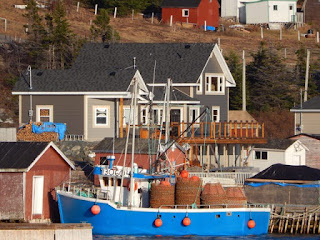 So we have been looking at RVs as you know and we had narrowed it down to a couple but last night we finally decided on one. We corresponded via email with the woman in AB who has agreed to allow us time to get there from here. I booked the flight for Thursday (tomorrow) afternoon and we arrive in AB tomorrow night.

Robbie (the dog) is going to 'The Puppy Hotel' which has been all arranged. Today I have a couple of things to sort out - Inspection, Insurance, Laundry, Tell my boss I'm taking a few days off (it will take us 10 - 14 days to drive her home with a stop in to see the family enroute).

We have both agreed not to make a deal on it unless/until we both discuss it in private after going over it thoroughly, and to walk away from it if we need to. Worse case scenario we can look at the dealerships (since we will be in civilization) but we will not be rushed into anything. I think the last rig was purchased too hastily (obviously) because we had flown all the way there to get it but this time if its a holiday we get then so be it. Just too bad we can't take Robbie with us. He is a car ride fanatic so an RV ride blows his little mind.

The RV itself is beautiful! 2007 30 ft Class A with an interior as close to our style as we have ever seen, so in theory at least it will take very little to 'make it ours'. Its a pretty penny over what we paid for the last one but we hope it will be in better condition. She has assured us there are no leak/water issues and that all is well with the rig, so we're hoping. I asked her for more pics because we were having to fly in and wanted to be sure beforehand, so (it seems at least) that she went to the rig and took close up pictures of walls, floors, furniture, etc. which I thought was really nice of her to do for us.

Bonus Prize: 1200w of Solar!!! Yippee! That was a big thing for us as Brad sleeps with a CPAP -when I say 'us' I mean 'me', Brad doesn't get how important that will be to his sleeping arrangements but he would soon learn without it. And 1200w is nothing to sneeze at, that's huge! Most rigs that have solar don't have that much, so thats awesome.

I ran all the numbers and her:
Wheelbase ratio is 51%: Perfect (should be less than 55%)

GVWR is 15,700 lbs - Curb weight is 13,115 lbs with a 75 Gal fresh water tank (623 lbs) this allows us a Cargo Carrying Capacity of 1375 lbs after us and the dog are accounted for. Big thanks to Marc @ RV Success School for letting me know that the 470 lbs of fuel I was counting was already counted in the GVWR which I didn't know.  Obviously we won't be driving around with full Fresh water tanks (623 lbs) but this is a good number to know when considering how far you will drive with this tank full.

Before a certain someone asks, not sure what route we'll take back but will likely be popping in for that first meeting ;) (sorry readers, private joke)

Super excited.
Posted by Gone Rogue at 4:42 am