Well... we've finally done it. We listed our house for sale. Our friend and realtor came all the way out here today and we now have a sign on the lawn. Actually, we don't have any lawn but you get the idea.

Because of the long weekend the listing won't hit the MLS system until Tuesday but the realtor seemed to think we wouldn't have any trouble selling it especially since we knocked $100,000 off the list price she had pre-determined before arriving. She was surprised by the size of it, apparently the house is much bigger than it looked in the pictures I sent her. I have not yet checked her website to see if it is there yet (probably not since that was only about 4 hours ago).

I had to take Brad to ER!! He was banging the sign into the property with the back end of an axe. Yes, an AXE! Got himself right between his thumb and forefinger, about a half inch long split. Built the entire house just the two of us and he built the 70' x 8' deck all by himself on the edge of a cliff and only upon banging in the for sale sign did he injure himself!!! 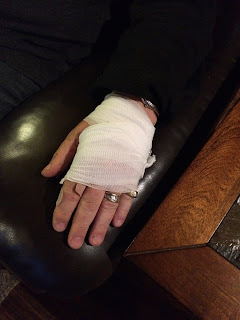 My poor baby has an owie

Anyway, after sitting there for a couple of hours with no Dr. in sight, we left. We went for supper to celebrate the milestone and he refused to go back to the hospital so I will be doing my Nurse Neverwell routine on him shortly and wrapping the damn thing up so his thumb can't move and he will just have to adjust for the next week or two. (PS Don't tell him I put this on the Blog - you know who you are) LOL

Well so much for that. He did it himself. Manly man and all that.

We still have no idea what we are going to do if/when it sells and frankly I can't even bring myself to think about it never mind try to talk to him about it. Since there really isn't much to talk about unless/until it sells anyway we might just as well wait it out. We have a couple of ideas and I have done some research into the options already so now its all about the wait. If it isn't sold in 3 months we will likely pull it until we return from our snowbird session in late spring/early summer and try again.

In the meantime and in between time I think we'll enjoy what we've built, spending the summer out on our deck with a drink or two - thats probably all we'll drink too. We often complain we don't drink enough. I will buy Coke periodically with the specific intention of having a stiff drink and then we forget we have it and it goes flat. I refuse to buy 2L bottles anymore just because of this. At least if you only open a small can the rest will hold for a couple of months if need be.

There is still the problem of our vehicle which we need to address. We have an FJ Cruiser which is not flat towable or even 2 up towable without spending a couple thousand $$ on something or other which is above my head, so I have been researching vehicles which are our style and flat towable. The Jeep Wrangler 4WD (2010 and up) is the obvious leader of that pack. Brad is very broad on the shoulders and just doesn't fit comfortably in most cars and neither one of us is really the car type, so... I'm watching for a suitable Jeep Wrangler 4WD in Canada - If you hear of one, please let us know.

Special thank you note to Kelly for calling me when I asked for some advise on RV Logistics, appreciate that.
Posted by Gone Rogue at 6:00 pm