We are not actually in Saskatoon but on an acreage just outside. The internet out here is appalling much like I expect Campgrounds to be from what I have heard, so I haven't written a Blog for a few days because, frankly, SaskTel doesn't have its *%!$ together.

We are definitely far too reliant on internet in this day and age (OMG, I'm old!) from the kids who walk/text/gethitbycar to restaurants filled with tables of people on their phones typing to others instead of talking to each other, but this is not the point of my Blog - there really is no point actually.

The past few days we have been doing some home maintenance stuff for Brad's Mum, a little babysitting of my nephew, running around doing odds/ends.

My oldest son noticed that our front tires are hooped. Part of our errands has been to find new tires and arrange for replacement of same. We have decided on a supplier/putteronnerguy shop and will be calling to make the necessary arrangements tomorrow. I haven't taken a pic of the tires yet but I will.

We also managed to get a doorknob, though I couldn't find the right colour and spent quite awhile going from shop to shop - this one had the colour but not the lock, that one had the lock but not the colour, etc. until Brad said 'the old set is still good, you just need the inside (latch) bit. So I bought a Brown set and thats what we did, just threw the knobs out and voila.

Finally managed to see my youngest son and  2/3 of my Grandkids today. The oldest was at her Mother's so I wasn't able to see her but hopefully this weekend, all things being equal.

Otherwise its been quite relaxing, just chilling out and getting some stuff done in the RV. Today we finally got to remove the dining table and pull the bed out so that I could see what kind of storage we have in there, not much but some. Refilled the fresh tank yesterday and I cleaned the mirrors and a few windows that had the dogs nose art on them.

So far we are finding this RV to be a good fit for us, not too big and not too small. It is comfortable for our needs at least so far. I know we need to do some re-arranging/organizing to better accomodate our stuff and create a bit more space, I had hoped to get to it while we are here but that doesn't seem likely to happen so it will wait until further down the line. Everything is put away for now at least so its really just a matter of using the space we have more efficiently.

Coming to Saskatoon is comforting in that it is familiar, we used to live here and so we know where everything is and how to get there (enjoy that while it lasts). Our favourite all time restaurant The Lebanese Kitchen that we thought was gone has reappeared and Brad noticed it on the first day as we were driving somewhere else. We have since gone for lunch and fully intend to go again before we go, next time for a sit-in meal since the owners remember us and want to have a coffee and talk world affairs with Brad which he loves. Our other go to restaurant is The Broadway Cafe (its everyones go to on the weekends), if you go be sure to tell Nicki that Brad & Katie sent you. That reminds me she wanted to get together before we go, hmmm. Gotta try to fit that in...

Moving into this week we have a few more tidbits to do at Brad's Mum's and we are having supper there tomorrow, my nephew starts Kindergarten tomorrow, coffee with Nicki, world affairs, new tires, Grandkids, we need a toaster and distilled water, aye aye aye...

I haven't taken many pictures during this visit mostly just enjoying the family, but I did catch one of Brad and my brother doing the dishes today. 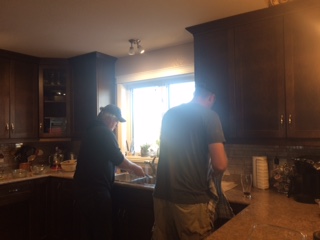 I will try to do better.