We arrived in Red Deer Sunday night and delivered Ace to Woody's RV World Service Dept at 8am sharp Monday morning. They were able to suggest a dog-friendly hotel and we ordered a cab, specifically noting that we had a dog... the cabbie that arrived doesn't take dogs, so we had to wait for another, only about 10 minutes, so not too bad.

The suggested hotel - The Sandman on Gasoline Alley was very accomodating when I explained that we are living in our RV which is now in the shop, they were able to get us into our room as soon as we were able to arrive. Nice room too, we were half expecting something akin to Motel 6 and got more of a Sheraton, so we were very happy with that.

The Customer Service which we are not accustomed to anymore was so very appreciated given we are not from town, have a dog and had no idea what we would do until the typical check-in at 3pm.

Once settled into the room we had a nap, we didn't sleep too well the previous night, 2 hours later Woody's called to say they didn't have the inverter in stock and they were bringing it in for the morning which will cause a delay as the solar is a 3 hour install but the inverter takes 10 hours due to all the wiring, etc., after a bit of to do, because we did book this several weeks ago, they have reduced their shop rate to accomodate for the extra night in the hotel.

We walked over to Denny's for brunch and heading to Walmart for new shoes for Brad we walked past a Sears which is closing (thats a blog post of its own) so after stopping at Tim Hortons back we went to Sears, not knowing it was 6 days to closing and most everything was gone, except for stuff he wouldn't wear or I wouldn't let him.... leaving Sears we went through the mall enroute to the Walmart down the road.

Now there's a Saje store in that mall.... I love Saje. So I ran in to grab some Goddess which is hard to find because everyone else loves it too, they had it and within 1 minute I was back out in the mall with Brad nowhere to be found. Thinking he had kept on to the Hudson's Bay to check the shoe dept there I went that way, no Brad. Looked everywhere, wandered the mall, nothing...and I had both of our cellphones. Aargh! My own shoes were bothering me so I decided to head back to the hotel.

Remembering I had the phone number to the hotel in my phone I decided to call the room, nothing. He's still in the mall somewhere (spending my money!!!) I decided to hang out on a walking path where I could watch the 2 sides of the mall hoping to catch him if he popped out.

About 10 minutes later I hear 'OY!' and there he was on the other side of the road. Having sat down and waited for me to find him he finally decided to head back to the hotel.

We spent some time outside, Brad play fighting with Robbie before going to Moxie's for supper. 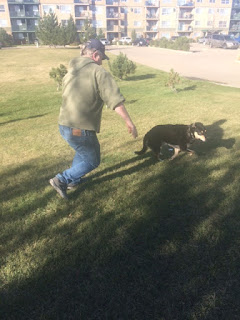 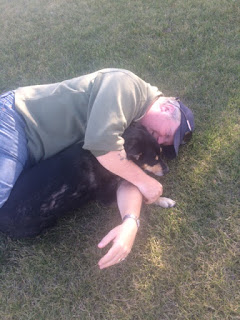 Again, great Customer Service. Don't know how long it will take us to get used to that again. Brad had a steak and I had Sweet Chili Chicken on rice. Time for dessert, not our usual thing, but we thought we'd look and see what they had. STICKY TOFFEE PUDDING! OMG! 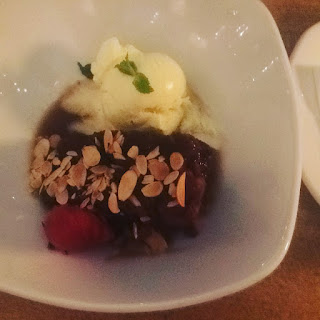 Spent the rest of the night relaxing watching TV in the room. My son texted to say he was driving back through this area so where were we. Thought he might get here late last night but he texted just as we were going to bed to say he was pitching a tent for the night and would be here for brunch.

I have less than an hour now to get myself beautified before he arrives and because I don't wake up looking that good, I better make an effort to be presentable. IF he has his truck and not his motorcycle, we'll ask him to take us to the shop so we can check on the progress of our solar....
Posted by Gone Rogue at 8:32 am