Well we finally did it. We found our first Geocache. On our walk to the RV place for vents yesterday we were walking right past it and so ducked in to the area where it is located and dug around in the bushes. Just a couple of minutes and Brad found it, a cute little camo box with lots of trinkets inside. I dropped a trinket in and grabbed a new one while Brad signed the book (it was his find after all). There was a trackable in the box but I wasn't sure what to do with it to be honest, so I left it. I have since looked into it and if I get the chance I'll go back to log it also. 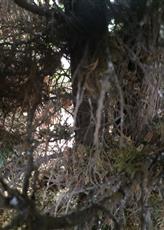 Its in here somewhere

Quite a bit of fun I must say, you might think it wouldn't be such a big deal, but it actually is. We both felt pretty excited at having found it. The other day when we were walking down the beaches I checked the app and there were no others close by but today there is another down that way so we'll likely dig around for that one when we go for our walk later today. Not sure why it didn't show up a few days ago whether it was a glitch or someone just put it there, either way we'll be looking.

While at the RV place we also managed to find a stake for tying up the dog outside and a 45 degree elbow for the sewer hose. This thing has been a problem forever, in order to attach the hose we've been putting it through the door instead of up through the hole in the bottom because we couldn't get it to connect that way. I've picked up several 90 degree elbows but the connection is too close to the hole for them to attach. This 45 should make that problem obsolete. In fairness I have managed to get it to connect through the hole since we arrived at this campsite but its not easy and so I'm hoping the 45 will make life easier.

After our asian dinner the other night I ran over to Home Hardware for a length of garden hose which will have 2 purposes, the first to wash the RV outside and the second to put the spinny stick in the black tank and rinse it since we've been reading full for a couple of weeks now even though we are not. We bought the spinner ages ago but haven't had a hose to get the job done and we've been running around playing tourist instead of working on the 'house'. That stops today.

We are heading into our final weekend before going south and so we have a few things we want to get done.
Posted by Gone Rogue at 10:36 am