So yesterday when I was taking Robbie for his morning walk, our neighbour asked if Brad would like to go with him to Oliver to check out a new race track that has been built - just for something to do. Well yes, of course he would. So I quickly made him a bacon sandwich while he was getting himself sorted and off he went for a Boy's Day Out.

Worked out perfect for me as it is easier for me to get things done around here when he's not here. He has difficulty doing some things because of his back/neck issues and I think it makes him feel awkward when I'm doing things that in his mind are 'guy' things. Out the door he goes with the neighbour and I promptly set about rinsing the black tank.

Drained the black tank, stuck the whirlybird stick down the hole, rinsed and flushed. Still gooped up so I did it again, still gooped up. Filled the tank to the top, let it sit for about an hour while I removed the inside door trim, wrapped some insulation stuff around the frame and replaced the trim. Then drained the tank again, stuck the whirly in it again and just kept repeating (probably 5 or 6 times) until only clear water came out. Bleached the whirly and put it out the window lowering it to the ground so I could walk around and sort it out. Broken. No idea how but it broke, at least I was finished and had cleaned it down so dealing with it was soooo much easier than it would have been had I not bleached it.

Back at the house we had had a couple of remote temperature watcher gizmos (I'm a gadget queen, remember) and I had one of them in a bay underneath. Realizing I should have put it in the water bay I moved it yesterday so that we have a gauge inside the rig to let us know what the temp is in the water bay itself. The bay is heated by a duct but I think its wise to keep an eye on it regardless.

I also managed to vacuum copious amounts of dog hair from the 3 floor mats, did a load of laundry and just a general cleaning up around the 'house' and because it appeared likely to rain I took Robbie for his afternoon walk a little earlier than usual.

Brad returned with tales of not only a racetrack but apparently they went off-roading in the back hills, something I would never have been able to do. I have an inner ear issue which sends me into a cat-on-the-ceiling fit if I tip or even perceive the possibility of it, so I am glad I chose to stay home and let him have a guys day out. He even took lots of pictures for this blog, what a guy! With all the stuff I was doing it never crossed my mind to take even one picture, I know, I know..... 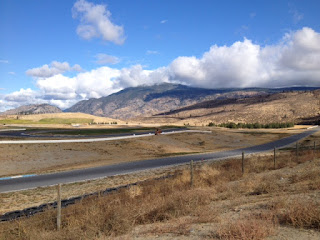 New racetrack in Oliver, BC 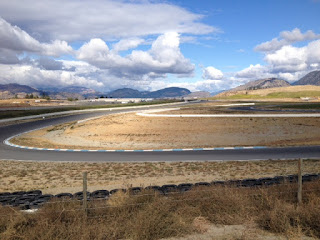 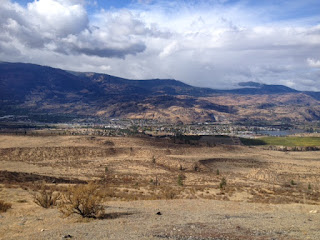 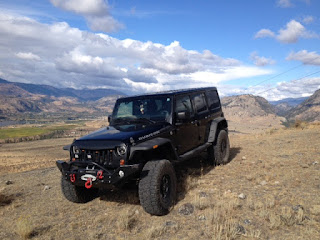 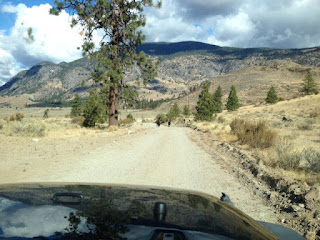 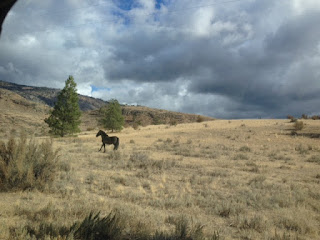 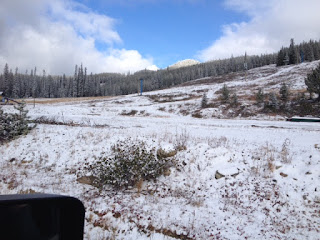 Snow in the hills 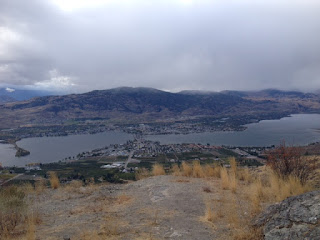 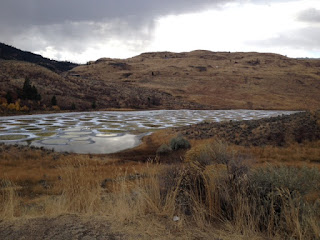 We went out for dinner as the meat I had out to thaw was not looking appetizing and had a lovely meal in a nice restaurant atmosphere, though the 'Potato Salad' had a twist -and parmesan, making it inedible for me. Without the parm I would have eaten it for sure, I did try but I just can't stand parmesan and couldn't get more than about 4 pieces in me. The ribs were phenomenal though. 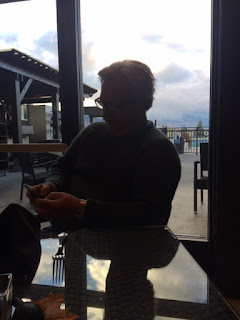 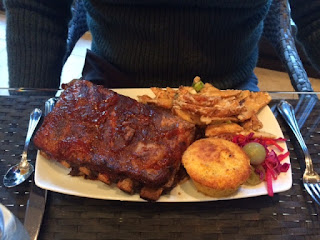 There was a table beside us all decked out with roses because apparently there was going to be a marriage proposal last night, sure hope that went well. We were gone before the couple arrived, and no I didn't think to get a picture of that either, I know, I know.

This morning we awoke to notice that our batteries were at 90% and then dropped to 89%. I sent an email to an RVer friend who knows TONS about solar/battery stuff and am waiting for a reply (its still very early). The reason this is a concern is because we are plugged in. Nothing should be running on battery. So unless its due to the cold I have no clue why our batteries would have dropped overnight. The sun is coming out now and they are replenishing but this could be problematic if we were not plugged in and something unknown is draining our batteries. We still don't have a TM-2025 monitor but it is high on our list once we get across - even higher today.
Posted by Gone Rogue at 9:10 am