We finally had a quiet day. It was great. We did virtually nothing all day although I did make bacon and eggs for breakfast, which we enjoyed outside in the shade with views of the Quartzsite hills. 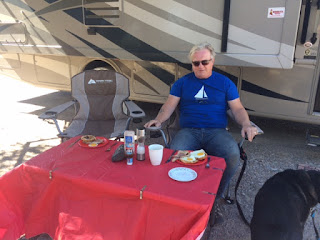 Its very hot here, although we are from Saskatchewan originally, we have been on the east coast for quite a few years and only saw the sun when we went to Saskatchewan.. so this heat is taking a bit of getting used to again. I mean its roughly 30-35C so its not like we've never experienced it before, its not 40 or 45C - that would be too much for our lily white skin for sure, it will likely take us a week or two to adapt and by then hopefully it will begin cooling here.

Funny story I forgot to mention... When we left on this journey we didn't bring any shorts or hot weather attire particularly, as frankly we didn't have any left so we figured we'd wait until we got to the desert to get some. Well the other day I went into Walmart (I can't remember which one) and asked the girl where the shorts were. "We don't have any, its "winter" she tells me, quoting with her fingers.

So the only shorts we have are the swim trunks we got for Brad in Osoyoos and I might have a pair of jean shorts somewhere (I can't remember where).

In any event, I did some shopping at said Walmart and bought a bunch of -- I don't know what you call them, hiking or workout type pants-- the stuff that wicks the moisture away, and a bunch of shirts. I bought a workout bra thingy because it matched and when I tried it on the next day, the front zipper won't stay up! It just zips right down and opens the entire bra exposing all my goodies to the world -so that's a goner. Not that I have a lot of goodies but what I do have I don't want the sun to burn! I'm all for "if you've got it, flaunt it" but that's a bit much and I don't want to scare the neighbours.

We took a walk this afternoon (only mad dogs and Englishmen go out in the mid day sun), did I mention we're both English? Well technically, I'm English as is Brad's mother but we both have what we call English skin - it burns FAST!

Well, I went to scout out the area and see if I could find a better spot, not that we don't like the one we have but just being nosey. Brad followed when he realized I hadn't taken a drink with me - he worries too much as I was within shouting distance of our rig, but it was nice that he joined me regardless. We didn't find anything better and so tomorrow when we head out to do some shopping in Parker we will have to leave a chair with a rock on it to keep our spot (apparently thats the protocol). Wonder if we should buy another chair for such instances as we only have the two. I'll let you know tomorrow.

Speaking of tomorrow. I think I will be changing my posting time from morning to evening. I'm doing this mostly for scheduling purposes. In the evening we are generally sitting in the rig relaxing, watching something, talking while the generator is charging all our stuff. In the morning its nice to get up and get going and I find that by the time I'm finished writing my blog and reading other blogs, I then have to beautify, sort the RV and general day readiness stuff and its as late as 11am before we are ready for the day. Given the heat here its important to try to use as much of the early morning hours as possible to do things before the sun gets to high. Once the sun goes down and the snakes, scorpions and coyotes are invisible -- that's the time to write blogs.

Here's a question for all you RVers: What fancy gadget do we need in order to get Over The Air TV? I imagined that we would just turn the thing on, put the antennae up and that would be that, but NO... we get nothing.. I know some people have satellites, etc. but I know there is OTA TV down here (unlike in Canada where everything is digital now) and I just don't know how to get it. Is there a required gizmo?

Often throughout the day I think of something to inquire about or mention on the blog but when I sit down to write to you all I can not remember it for the life of me, my short-term memory has always been bad. I guess I'll just have to keep a notepad with me and jot things down as they come up.

We haven't met any of our fellow boondocking neighbours, some were gone before we were beautified and everyone is still fairly spread out here as the masses have not yet arrived. Oh, one thing I wanted to talk about was the damn internet!

WTH is wrong with the internet? Actually, we found it to be particularly T-Mobile as we were driving here from Canada, we also were on Verizon and AT&T without any noticeable hiccups, but guess what we're on here? Yup, T-mobile. Figures. We have full bars, there are not a lot of people -- well there are a lot of people but not nearly as many as what is coming -- and the internet is slower than molasses already. I know all about the wifi boosters and no we don't have one YET but its on our list - along with tons of other stuff.

Dawn - if your reading this there are a lot of Geo-caches in the area that I will be hitting up in the coming days so watch for that. This Geo-cache thing is great when you don't know an area it gives you a point to walk to and gets you off the proverbial couch. I'm sure I walked right by a couple today when I was hunting for a spot but I had Google Earth open to help me look around. Perhaps tomorrow if we get back early enough.

I must say, this writing in the evening is much better. I'm not feeling so rushed and I'm able to put the proper links in AND write longer posts. Feel free to moan at me in the comment section but I like this so far.

Tomorrow... bikes? Oh, and its my birthday tomorrow too so MAYBE an Instant Pot?