Alright so I'm going to relay today's events in sequential order.... try to keep up. :)

So this morning we were due to be at Discount Solar a little before 11am.... We got up and beautified, packed up the rig and off we went. First sight we saw this morning was our neighbours rig with a large sign across the front that says, " We shoot every third trespasser and number two just left". Clearly not a friendly chap and I'm so glad I saw that before I walked up to his rig (I wouldn't have seen this sign from our angle) to say hello. 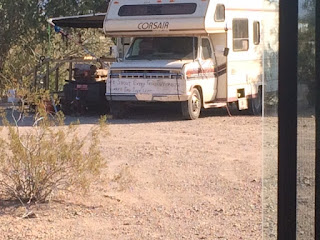 We then drove over to the Goodwill (behind Silly Al's here in Quartzsite) and dropped off my crockpot, the printer and a bunch of sweaters that I'm clearly never going to need again. I kept 3 sweaters and ditched the rest, most of which were fairly new (don't tell Brad). The women in the shop were so excited to see us bringing in stuff that one of them actually ran around the counter and gave me a hug, Brad was making a Beeline for the door but she chased after him and he got a hug too. Not anticipating any of this display, I didn't take my cell phone with me as my arms were full. So no pictures. 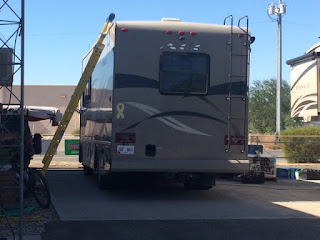 We were at Discount Solar by 10:30am, sat waiting in line for an hour and then went into the 'waiting room' but we felt like a bunch (there was another couple there as well) of Mexican Immigrants stuffed into a cargo container (it was a converted one, quite literally) and the heat (40C) was unbearable, so I grabbed a bunch of chairs and we all went to sit outside in the shade where the breeze was.

Brad and I decided to take Robbie for a walk and we went down the road to Taco Mio and enjoyed a nice lunch in air conditioning. Robbie stayed under the table between us with some ice water in his collapsible bowl. 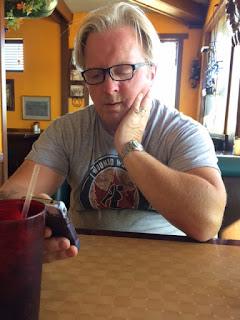 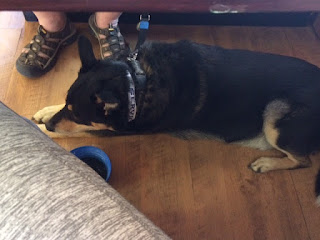 It was just too damn hot to walk any further and we were feeling the burn, so we returned to our Mexican hut and sat outside with our co-immigrants. Every now and again I would go over and check on Kendon (the installer guy) to see how things were going.  The guys at Discount Solar are all really great. They worked non-stop on those rigs all day long. Always happy, never moaning, remember it was roughly 40C today and they were out there in the heat and sun. Pretty impressed with this place, I must say. They were upgrading all our wiring to the appropriate ought, installing a Xantrex LinkLite Battery Monitor (Thank you Brenda and Len) and 2 more batteries. Putting us at 480w on the roof and 6- 6V Golf Cart Flooded batteries. Enough to send Armstrong to the moon! Totally wired for sound, we are. 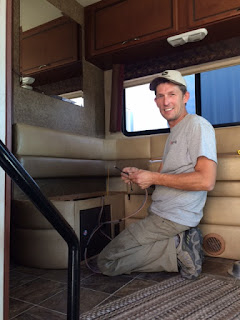 Our co-immigrants showed us a map they use, Benchmark maps. Looks pretty detailed and it shows the areas by colour ie. Public land, Forest service, etc. I will be keeping an eye out for one of these. 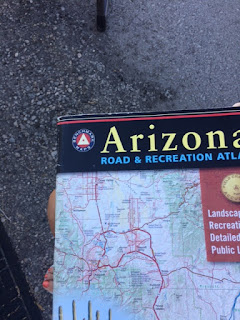 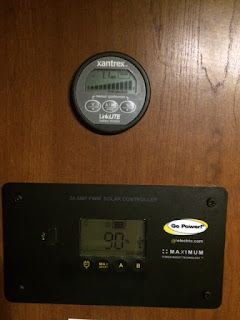 $229 US... plus install, but I think it will pay for itself. I wanted it because it has a battery alarm that you can preset to whatever you want so that when your batteries reach a certain percentage an alarm will sound -handy when you use it mostly overnight. So toward the end of the day Kendon advised that there was some kind of snafu happening with my alarm gizmo so I went to the office to inquire what was going on. Turns out they were out of stock of the alarms... but as I was talking to him he got a call that someone had one and they wanted to install it tomorrow. When I told Brad, after 7.5 hours of being in 40C heat, he wasn't having any of it. So I went back to the office and said we would go without the alarm. "Oh, your getting the alarm," he says, "if I have to chase you to El Paso". Apparently there had been such a kerfuffle around the shop all day about this alarm - which we didn't realize - so we agreed that the next time we move the rig to dump or whatever that we will call them and let them know we'll be coming in. A couple of minutes is all they need Craig tells me. Everything is pre-wired, etc. they just have to stick it in. Okay. 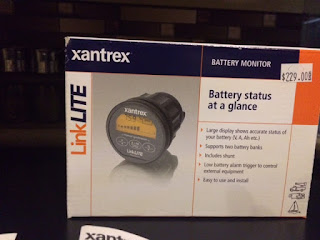 We got back to our 'home' base and the chair with the rock had held it for us yet again. Don't know how long this will last, but so far so good. It was 6pm when we got the rigs levellers down and I whipped out the BBQ and did up some quick hamburgers and chips for supper. Before they were cooked darkness was upon us. Mental note: be parked before 5:30 because I'm not putting those pads down under there in the dark with all the wildlife out here in the jungle.

For those who do not know, HP Sauce is named after the Houses of parliament in England. We are English and this sauce is a staple around here. Now in our previous unmentionable abode we had easy access to HP but not the Keene's prepared mustard we love, so my family would send us some for Xmas or birthdays, etc or we would get some when we were there. So when we packed the rig, I brought along a couple jars of Keene's but didn't even think of the HP... tonight we had burgers, and I discovered that we are almost out of HP!!!! This stuff is Gold and they don't sell it down here. So what did I do? I loved Vickie.

I texted the previously mentioned and sinister Vickie that we met in Osoyoos who will be coming to the states with her dearly beloved Bruce and begged her upon bended knee to please bring me a couple of bottles.. She has agreed. The woman is a saint! LOL 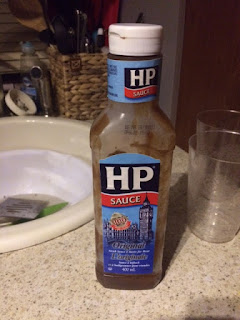 All day - and I mean all day- Brad has been looking at Jeep Wranglers and has found a couple that we will be reviewing once I get this blog finished. So goodnight one and all, I'm off to the Jeeps.