Leaving this morning around 9am gave us a short window to chat with Debbie and B-Ken. In last nights post I couldn't remember his name but thought it started with B... and I was right, it's B-Ken (just kidding, its just Ken). Sorry buddy.

3 states in 3 hours... We had to do the usual Security Check Stop going in to California on our way from Arizona to Nevada, Brad is wearing one of his Disabled Veteran T-shirts since it's Remembrance Day (Veteran's Day in the U.S) and the guys talked more about that than anything else and we were clear to go through. 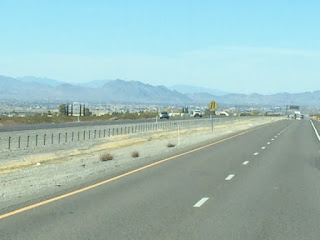 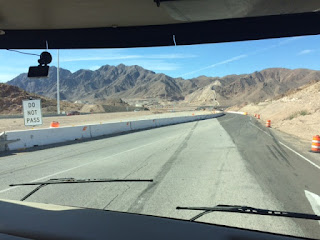 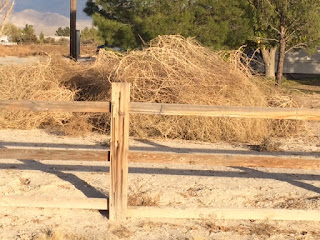 We arrived in Pahrump to our RV Park about 3pm and got the rig set up. We are here now until next Saturday (18th) and we plan to get as much in as possible in that time. There seems to be a lot to do in this area (awesome) and that's just the stuff we know about already, can't wait to find out about everything else there is to do.

We weren't in our spot half an hour and we got a knock on the door that someone complained that our sewer hose was on the ground. Apparently it's a county ordinance or something something. Fine, we don't care. We'll go tomorrow and get one of them sloping sewer hose whatsits, I wanted one anyway... just never actually 'needed' it until now. Tired of fighting to get that damn hose to lay properly anyway.

We also don't have a surge protector yet, it's on the list. I asked the guy if we should have one here and he said only a few use them so I guess it'll be alright for now without one.

We went driving around Pahrump but when we realized that we just fell back an hour we decided to grab something to eat as it was already getting to dusk. Where do you find something to eat in Nevada? The Casino of course. Went to The Nugget Casino spent a tiny bit of cash on the slots and then down the road to The China Wok.

It was good, certainly a better selection than we've ever seen in Canada. Some stuff looked like something but turned out to be something altogether different, but tasty nonetheless. Home now for the night and we'll figure out what we're going to do tomorrow - tomorrow.

Thanks for coming along with us today.