Today was laundry day, we needed a day to recover and may still need yet another so I was going to do laundry. 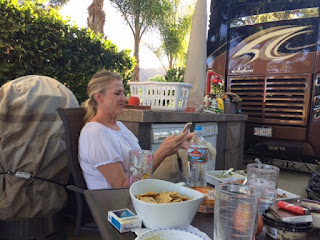 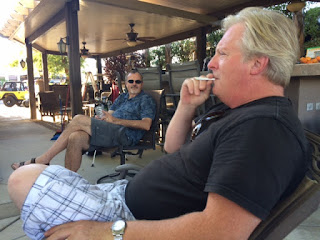 Vicky suggested I use the machines on their site so we could visit at the same time (our site is not so posh as to have its own laundry). Sounds like a good idea so I did. Brad went off to Temecula to pick up some groceries and I went to Vicky's. For some unknown reason the dryer kept flipping the breaker so Bruce suggested trying it without the element ie. no heat and that worked really well so after several hours my 2 loads of laundry were finished, Brad had returned and when everyone was caught up Brad and I came home to make dinner.

We had some organic ribs we picked up in Saskatchewan still and looked forward to them all day but when we BBQ'd them they were more like dog bones, almost no meat. Very surprising and very disappointing, we've been buying organic meat from this place for years whenever we are in Saskatchewan and never had a problem, their meat is always fantastic so I think there must have been a mix up when it was packaged. I had made a nice salad to go with them thankfully so Brad managed to fill up on something and after dinner was cleaned up we settled down on the loveseat with the site canopy open so we could look at the stars. 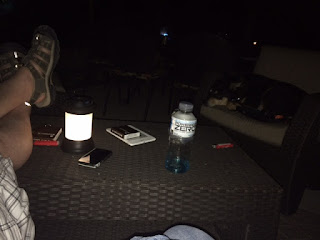 Our spoiled little doggie has his own chair

Bruce & Vicky came over and we had a nice visit for a couple of hours before they retired for the night. We sat a little while longer and then I came inside to write the blog. I can now hear Brad coming in as I type this.