As per usual it was a slow start to the day, a very slow start. We didn't even get beautified until after 1pm!

We did however manage to get more done today than most days. We sorted through and organized the under bed storage this morning. We need to create a space to put the Jeep windows, while not huge, they are a fair size and with the new mesh on Deuce we can't fit the windows in the back anymore.

While sorting, I managed to set aside several items that I took to the Club House, they have a table where people can donate things and if someone wants them they put a donation in the jar and the funds go to activities for the park.

If it were up to me I'd have a hell of a lot more stuff to donate but His Lordship gets sensitive when I get rid of stuff he's paid for not that long ago. See the problem arises because when we purchased the RV in Red Deer and drove it out to the East Coast, we had nothing. So I went into Walmart and bought what we'd need for a couple of weeks to get home. ie Kettle, Plates etc.

Once we were home and I was loading the RV we no longer needed a lot of this stuff as we had our own things. I am gradually trying to eliminate stuff but I have to do it slowly...

Brad took the RV to the Park's Wash area to give it a good cleaning and buffing. I was doing laundry and then I took Robbie to the bigger Dog Park within the Park (there are two). 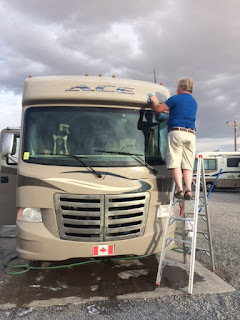 Another dog joined us so he got to play with a friend for awhile but after the friend left Robbie just laid at my feet so we went back to the RV and I helped Brad with the buffing. That was a lot of work and he will surely pay for that tomorrow.... I forgot to take my camera so didn't get any pics of the dog park.

Returning the rig to our 'spot' we got it set up again and caved in and went out for supper. Where to eat when your in Pahrump, NV? ChatThai, of course. Sure enough, the food was just as good today as it was on Monday! Incredible.

Funny thing is, shortly after we got settled at a table a woman came in to pick up her order and apparently she had wanted 3 orders of Calamari and they had only made 2. They asked for 15 min to make another for her but she refused and walked out without any of her order. Her loss is our gain. We could see it all sitting in the window waiting for pickup so Brad asked Jen (Waitress) what her order was... Wonton Soup and 2 orders of Calamari... "We'll take the Calamari" he tells her. No need to let good food go to waste and we had nibbles while they made our order. They gave us the 2nd order, on the house. 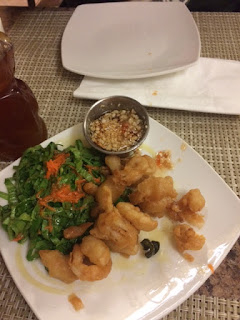 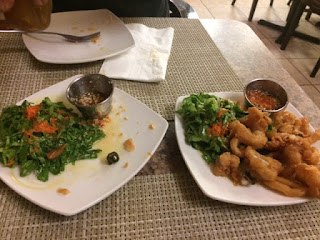 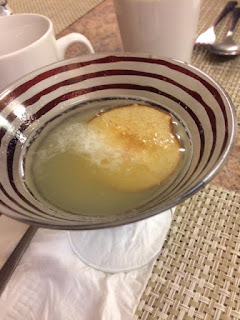 Pair of Kings (alcoholic beverage for me) 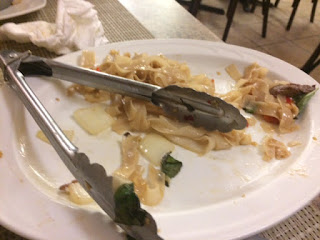 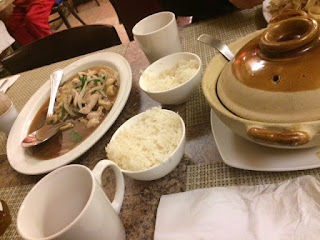 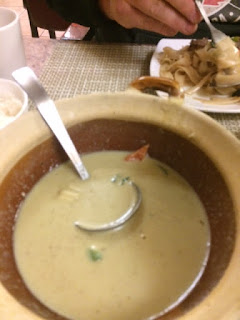 
Chat (owner) was not there tonight so I still have not been able to meet him but his guys did him proud with the food they were serving. And, I was surprised to see that even with the owner absent there was a guy cleaning the equipment which really surprised me, I must say. Usually when the cat's away.... Poor Jen had new shoes on tonight and they were really bothering her feet. She was super busy and honestly had trouble finding a minute to put a bandaid on the blisters. She is a great waitress and given what she was dealing with there tonight, we gave her a 30% tip to show our appreciation for her efforts. Definitely not the norm for us, to us 15% is pushing it and I always try to stay to 10% just out of principle because the 15% infuriates me... but that's another blog.

RV Life is a game of Tetris! Tomorrow our big plan is for me to work some magic on the under bays to create room for the windows which will free up a large space under the bed for stuff which is currently kept in the under bays. We have decided to spend most of the day tomorrow (weather is supposed to be nice) sitting outside, relaxing and having a drink or two.
Posted by Gone Rogue at 8:12 pm