We were invited to a Xmas party at George & Andy's yesterday morning. We'd never heard of a Xmas Party for Breakfast and we were looking forward to it since there would be a fair number of people there that we had previously met.

George & Andy have a beautiful spot with a gorgeous view. 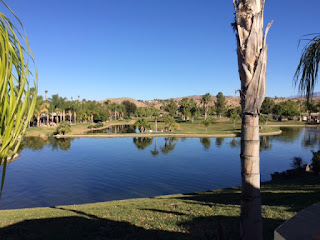 They were serving breakfast margarita's, I could not bring myself to drink alcohol at 9am so I had orange juice and Brad had his staple coffee. The margarita's looked amazing though with shrimp, asparagus, celery and bacon. Wow. 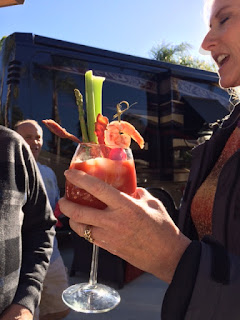 Of course there was proper breakfast foods as well, the guys had everything there bacon, croissants, muffins and cakes, quiche and bread pudding it was a great spread. We enjoyed spending time with some of the people we have met at this park and even met some new people which is always nice. There were probably 15-20 people there which I thought was a great turn out for 9am! George & Andy are great hosts and we appreciate being included in their event. 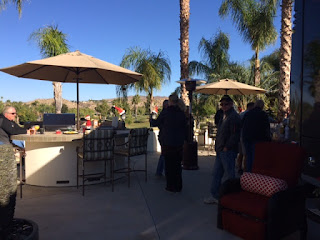 Brad had an appointment at Noon so we had to leave earlier than we would have liked but enjoyed ourselves nonetheless.
Posted by Gone Rogue at 8:55 am