Very slow morning. I said I'd try to meet Vickie at Pickleball this morning (Google it) at 8:30am but since I didn't get up until 9am... Hey, don't judge - Brad didn't get up until 11am! He was up in the night again which has become unusual since we've been living in the RV.

Anyway just as he got up and was making a coffee we heard a noise, we both wondered what it was but figured it was the neighbour moving something around. Coffee made Brad always opens the door to get some fresh morning air blowing through the place, who should poke her head around the corner but The Vicster (Vickie aka Trouble Maker). They came to get their bikes which we borrowed just prior to arriving at this resort.

She really enjoyed the Pickleball and I said I'd try again tomorrow to make it to the court. I have my alarm set for 6:30am tomorrow so hopefully I will actually get up in time to have a coffee and a smoke (yes, I'm weak) before getting in the phone booth and revealing my beauty to the world.

Around 1pm we decided to hell with it we'd go shopping, at least to Costco. We'd alternate (we've done this before) shopping while the other waits in the car. I spent an hour wandering Costco for gifts for Brad in Xmas shopping hoards.... get to the til and my card won't work. Costco doesn't take MasterCard, only Visa! You have got to be kidding me!!??!!! 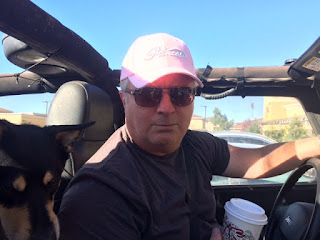 I was so agitated I returned to the car almost in tears. Brad wanted to cheer me up so when we stopped at Ralph's to get his coffee fix (Starbucks again), he took forever. Returning to the car with a dozen roses and a bottle of Crown Royal - and a vase to put the flowers in. 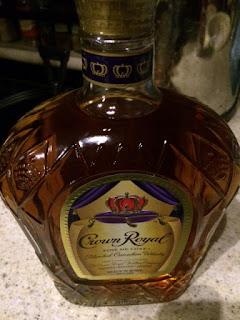 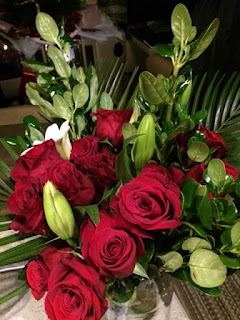 I had finally decided to buy myself a bottle of Crown while at Costco. I don't buy the Crown I like because I can drink the Jack Daniels he likes so I do rather than waste money on a bottle I'll hardly ever touch. Obviously, I didn't get the Crown because they discriminate against MasterCard users...

On the way home we also stopped to get the mail. Turns out the Surge Protector was sent to the USPS office instead of to the site like the rest of the order. I don't know why. A Xmas package from Brad's Mum was there also so we now have even more prezzies under the tree. The dash is filling up.

Once back at the rig, I pulled out the Instant Pot and got a Roast on the go. Put Yorkshire Pudding in the Convection oven and gravy on the stove top. Delish!!! 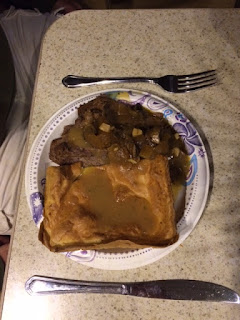