I finally made it to Pickleball. Actually, I was late, but I was there. I had intended to sit in the Jeep and watch to see if it was really something I even wanted to do.

When I pulled up, I lit a smoke and then realized that Vickie & Janice were playing with a trainer and were quite obviously down a man. Walking over I asked if I should just watch or if they needed an extra man, come on and play they said...

So I did. Pretty good game, obviously I was oblivious to what I was supposed to be doing but I think I cottoned on fairly quick. If I'm up early enough I will likely go again tomorrow.

We spent over an hour on a Skype call in the late morning and then did some research on the topic of that conversation for a couple of hours afterwards.

Our neighbour arrived last night (he is also the owner of this lot) and this morning he quickly set about fixing our sails in the back. If you recall the stitching had separated and we could no longer close it. Though I did speak to him briefly this morning, I haven't had a chance to thank them as yet. They have company over at the moment and we just returned home. I will speak to them tomorrow.

Vickie messaged that they were in Temecula getting Gus(dog) a grooming so I asked if they'd like to meet us for supper. We met them at Aiyara for Thai and it was a nice dinner with friends. Don't think any of us will return for the food but the service and our company were very pleasant. 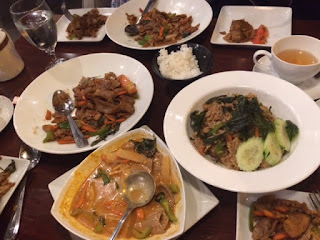 We just returned home and expect to have a quiet night relaxing with the TV
Posted by Gone Rogue at 8:52 pm