It's been a quiet few days around here, just too windy with the Santa Ana's blowing through. Too much to go anywhere and too much to even sit outside.

I ordered a water filter and adjustable pressure gauge for the RV which came in last week and it was giving me trouble. There was a drip that I just could not stop - until I realized it wasn't coming from the connections it was coming from our hose. Where the hose itself connects to the connector, so off to Home Depot for another, they didn't have one and so we had to go to Walmart. Now, no more leak. 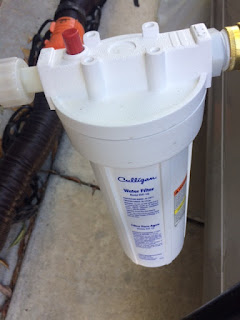 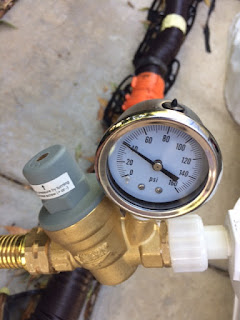 I assume the park pressure is 40psi since I've tried to adjust it with no luck. It works, allowing us decent shower pressure unlike the non adjustable one we used previously which required us to run the water pump and keep the fresh tank full in order to have a decent shower.

Today another order is due to be delivered, it should be a surge protector and a stand for the filter. Not sure if they have split that order into two or if its coming as one.

I did something to my pinky finger several days ago and I've been trying to rest it. It's hard to type without a pinky (I don't type with 2 fingers) and with nothing of particular interest to write about I decided not to post a blog to allow the finger time to heal. It hasn't. Pretty sure I brought a finger splint along so I'll be digging for that today or going to Temecula to buy another. I don't remember doing anything to the finger and presume I put too much pressure on it opening/closing the RV window. Almost a week now and it's getting old so time to deal with it.

Went to Bruce & Vickie's last night and finally met friends of theirs, Dave & Janice. Nice couple and we had a good laugh but the wind kicked up again and we remembered the sail in the backyard was still open so rushed home to get it closed before it became damaged.