Thought it would be a quiet day

When we woke up yesterday we had our morning coffee on the internet as per. Brad had a massage at 10am and I planned to get some organizing done around here, given our new situation we will be able to leave some things behind when we return to Canada, so my plan was to go through the entire rig and pull out what we won't need for the trips back and forth.

Then I remembered I had to do laundry.... off I go to get that on the go. Set my phone timer so I wouldn't forget it - I usually do and that's not conducive to laundromats. Then while waiting for my timer to ring, I got to work on the inside of the rig. Moved several things like PFD's, tackle box, etc. outside into our locked deck boxes and when I returned from picking up the finished laundry His Lordship was home, weeding - again.

We had a new visitor, Bill drop by to say hello. Bill is a fellow Canuck just down the road and while talking to him, Dwayne came by to show Brad a few things about our new water softener.

This site was not maintained for ages and while weeding Brad uncovered (literally) 6 sprinkler heads that weeds had grown over. As I came back out from putting the laundry inside, I noticed Bob (new guy in our old site) walking across the creek with 2 glasses. He very thoughtfully had seen Brad outside working and made him a Vodka/Tonic (I think it was), of course I wasn't home at the time but I had an OJ on the go already so we visited with Bob for awhile.

During that visit, Karen & Dave drove in, literally with their Golf Cart right to the back where we were sitting LOL. Chatted briefly and then they were off, Karen returned later for a visit while Dave was out gallivanting in the desert. He likes to take long walks.

While chatting with Karen I got a text from Vickie that she was having an impromptu goodbye party for her daughter, who's name is Alondra btw (I couldn't remember it in a previous post).

At said party all the regulars were there and I even managed a picture or two of Brent who I hadn't captured at our party the night before. 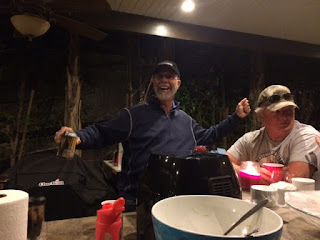 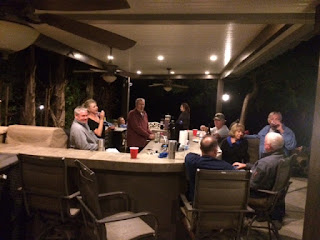 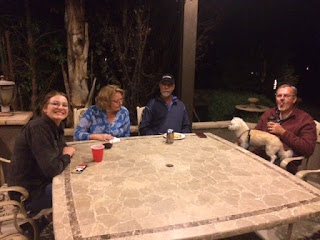 L-R: Alondra, Lisa, Brent, Gus (the dog) and Bruce who stuck his tongue out and is now on the internet mostly because I'm mean that way. :) That'll learn ya!

I never did get to sorting through the outside bays so that will be my job tomorrow since we already have enough going on today and it's only 7am. Brad is feeling the effects of the two 'Vickie' drinks he had last night.... she's heavy on the booze, along with the one Bob brought over. The chronology of today's events are not guaranteed, btw... I am blonde after all.