What to do about BloggerFest

I was reminded this morning about Bloggerfest coming up Jan 27th in Quartzsite's LTVA South, while I have been aware of it and had full expectations of attending, given our change of life plans I checked this morning to see how long the drive is to Quartzsite. 3 hours. I really want to attend and so will be giving this a lot of consideration. 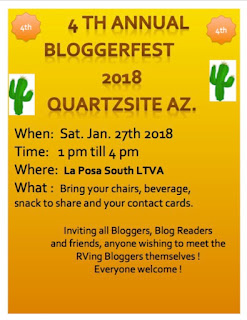 With so many people both Bloggers and Vloggers in the area, it would be a hell of an event to miss! I've been following these people for so long, I would hate to miss the opportunity to meet some of them. I can only imagine how it will go when I tell Brad we have to drive 3 hours each way to go though...

Brad went to town yesterday to take care of some business regarding the purchase of our new lot and while he was gone I got to work. With 1.5 inches of rain in the forecast I wanted to get some caulking on a spot I had noticed.

The resort has a company that looks after gardening issues for owners and I spotted Glenda when I was puttering so asked her to pop over when she was finished what she was already into. Our new site has about 9 palm trees surrounding it and they need trimming - badly. 4 of those are bigger ones which are actually on the neighbours property, the problem is that these palm trees have been known to have ants in them and I do not want them getting on the top of our rig.

I stopped over and introduced myself to Ken, our new neighbour and inquired about the trees. I was hoping to get permission to have them trimmed but as it turns out, he has already got someone coming on Monday. Perfect.

I also went to the real estate office to have them ask the current owner of our lot for permission to cut the trees on our site, I want them trimmed 'before' we bring the rig over there. Permission was received.

When Glenda returned with our quote, $100 for 5 trees, we accepted it. For now this works, in future I think we will be finding another alternative. Dave & Karen have suggested we go halves on a clipper gadget we can both use.

Brad returned with groceries, including 3 steaks. We invited Karen over for a BBQ supper as Dave is away for a few days. We had a lovely supper of Steak, Greek Salad and Cole Slaw, then Brad went inside to watch the Canada vs Sweden hockey game (Canada won 3-1).

Karen and I played Dice outside until well into the dark. Haven't met anyone else who plays Dice so it was a nice surprise when Karen asked if we knew it. We have plans tonight to play some Crib (I'll try to remember pictures), and one of these days we shall teach both Dave & Karen how to play Kaiser. Look forward to that as we haven't played Kaiser for years. Very few people know the game and no one ever cares enough to learn.
Posted by Gone Rogue at 9:58 am