Dinner with Friends and more PickleBall

I didn't write a post the other day and so I almost forgot to mention that we were invited to Bob & Barb's for dinner the other night, with Dave & Karen too. We had a great meal and of course, great company.

Sat around the fire pit for a while afterwards and really had a great time. 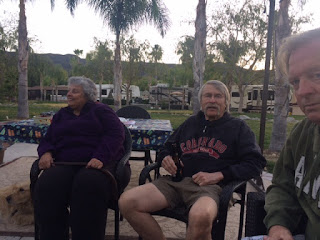 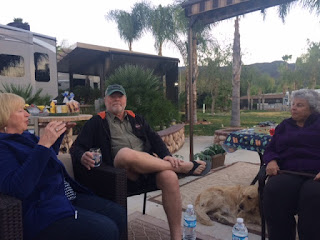 Yesterday I took Brad to PickleBall and we played one game, I didn't want to over work him. He does have a bad neck and back from his time in the Military and we weren't sure how his body would react to the movements required of PickleBall. I think one game will likely be his full roster but perhaps he'll be able to do more as his body warms to the idea.

You try to be nice to some people and include them in the things you do and they beat you! Again, playing with 4 this time, he still beat us by 3 points with his partner Sandy.

In the afternoon he cleaned the golf cart and put more air in the tires. We took it for a drive before the sprinklers got at it again, we need to pick up some sprinkler barriers but keep forgetting. Definitely need new tires on that thing as they deflate after about 2 weeks.

While we were driving around he suggested we go to The 15th Hole for burgers instead of cooking at home, so off we went. Who am I to argue, I hate to cook. After supper we sparked up the inground fire pit and sat around it for about an hour before coming in for the night. 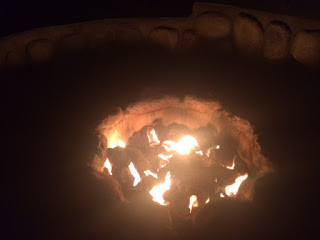