Remember that 5th wheel hitch that was left on our site when we bought it? Well we sold it the other night. A really nice couple (except she is 64 and looks 44, literally) bought it. They have ordered a 5th wheel and are excited to go on their own adventure. I don't think they're going Full Time but at least they'll be out there enjoying the country. 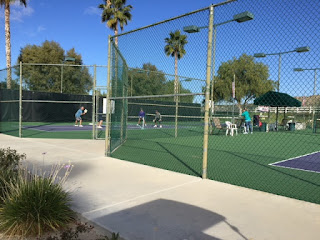 I went to PickleBall in the morning and played 2 games. Unfortunately, everytime I hit the ball I fouled it one way or another. Since they had some new players to the resort that hadn't played for a while but were well experienced, I figured I'd go home so that they could practice properly without me ballsing everything up all the time. I couldn't stay long anyway...

Our propane tank was showing empty yesterday so we finally had to move the rig. I hate this, not because it's a big ordeal but... well, I'm not sure why I hate this... but I do. On Sundays propane fills only between 10-11am so we needed to get at it since it after 10am when I got back from PickleBall. 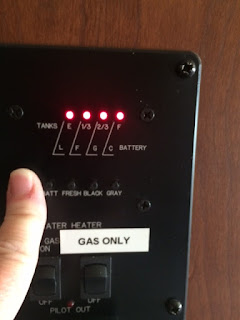 The advantage to having such a small rig is that everything is always kept 'put away'. So to move we just have to secure Brad's computer, the kettle and the water jug.. then bring in the slide and disconnect. Simple really, I don't know why I get so distraught about having to move it. The entire process from take down to put up including the propane fill itself took about half an hour and that's because there was a line up at the propane tank. 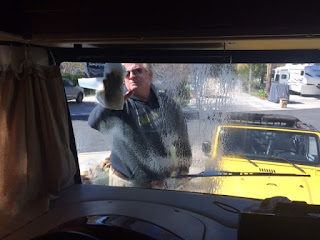 Spoke to my Grandkids on FaceTime and later in the day I was able to talk to my Daddy on FaceTime also, I'm a Daddy's Girl!!! I try to call every week so everyone knows we're okay and still love them.

Karen came by and I played her 3 hands of crib and then Brad and I played another 5. He and I are in a Crib Tournament of sorts and he's beating me --- again. It's so not fair. Doesn't he know I'm cute?!

We had to get the outdoor living room put away (cushions, etc) because we were supposed to have a huge storm in the night..... Nothing.... there are slightly gray cumulous clouds coming over the hills so perhaps they just got the timing wrong...

Found out last night that the resort is starting a 'Movie Night' at the Main Club house - Friday's... that will be soooo awesome. Bring your own snacks and drinks... I can deal with that since I don't like the American popcorn. I know that sounds weird, but it is actually not the same as Canadian popcorn.

This morning I am walking with a new friend, Roh. So I have to go and make myself stunning beautiful... I'm looking forward to it because I know she is a fast walker, like me. My only concern is that I don't have a decent pair of runners. We had intended to boondock, so I brought an old cheapo pair.

Off to beautify, wish me luck.