Water Softener Recharge and Night out

Not really sure what we did all day yesterday...

I remember being late for PickleBall and no one was there by the time I arrived. Oh wait, I remember!

I recharged our On The Go Water Softener. It worked great. Had no trouble at all.

I detached the RV side of  the hose from the Water Softener, attached the 'specific to this procedure' remnant hose that I picked up for $7 at Home Depot and removed the cap. While pouring the salt in the top the water was rising inside and was very close to the brim. I realized that the Water Filter was holding water and the pressure in that side of the line was causing the water to enter, so I had to hold the red button on top of the filter down and this allowed the water to recede from the brim.

Managed to get both boxes of salt into the Water Softener, added 3 tablespoons of 'Rust Out', replaced the cap and turned the water on just enough for a reasonable flow which when through the remnant hose directly into the sewer drain. Left it running for 25 minutes at that flow and then increased the flow for another 5 minutes. Once that was done, I removed the remnant hose, cleaned it before putting it away and re-attached the RV hose to the Water Softener. While I was at it I also replaced the Water Filter with a new filter and was surprised the old one was only pink not shite brown like everyone else's I've seen in this park. That was about 3 weeks with that filter, so that's good.

Once I had everything connected back up, I came inside and did the dishes. This allowed the water lines to clear of the 'old' water which was obviously higher in hardness (hence why I recharged it) and replace it with the 'new' treated water. Only then did I test the water. 0 !!! Woohoo! Whew!

I figure if I replace the filter every 3 weeks and recharge the softener every 6... well, we'll see how it goes. I'll be monitoring the hardness and see how we do so that I can come up with a system. Of course, by the time I get that figured out we'll be heading home.

Only 6 weeks left in our little paradise here before we have to head back up to Spring.... Anyone know what the typical weather is in Calgary, AB and up the I-15 the first 2 weeks of April? it's been so long, I can't remember.

Bob & Barb left us some Pork Chops before they left and they wouldn't fit in our freezer so we had them thawing in the fridge. Brad decided he would BBQ them last night, with Apple Butter Sauce, pretty delicious, I must say. We also had some pick me up salads from Ralphs so it was an easy peasy meal for me. 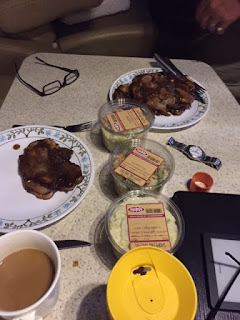 After supper, we went over to Karen and Dave's for a card night as it was cool outside last night. Played Crib, Dice, Kaiser and two games of pairs Crib. Had a lot of fun! Thanks guys, hopefully next season we can host you at our place for same ;) Then we sat around and chatted on their comfy furniture in their livingroom until about 10pm! Pretty late for us old fogies, but we managed. 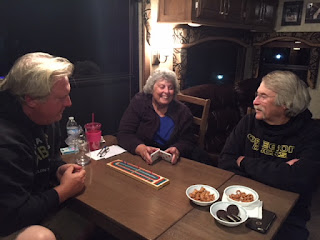 And here it is 8:20am and I'm on schedule to be late for PickleBall - Again! Got to Go!

PS Someone commented on yesterday's post that JoJoBa RV Resort has super soft water, and I found out that it is because their wells are REALLY deep apparently. Thanks for that tidbit Commenter person. I don't have time at the moment to look you up but I will later.

PPS Bob & Barb arrived home to find that a good portion of their Sticks and Bricks home didn't have power. Something to do with the cable guy... I said it was a sign that they should sell everything and buy a lot here.... I don't think they believed me.