Last night the resort held a Homeowner's Dinner, catered by the resort's restaurant The 15th Hole. Brad was unable to go as he wasn't feeling very well and because David is away, I asked Karen if she would like to use his ticket since they hadn't picked up any tickets. Prime Rib dinner isn't something you just ignore after all.

Because it was raining alllllll day yesterday, Karen picked me up in her golf cart since hers has a rain cover and ours doesn't. We had a bit of difficulty finding somewhere to park, it was a little crowded over there, but finally found a spot and walked in the rain to get inside. The place was packed and it looked like we'd have trouble finding a table but we were called over to a table at the front which had 2 seats open. Met some friendly new people, so grateful for those seats.

The Main Club House was decorated very nicely and with some 260+ people there last night, quite a gathering. The dinner was served buffet style and it was really delicious. 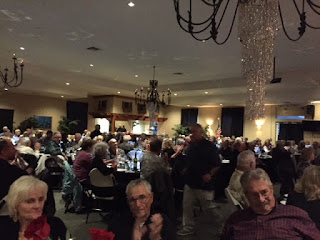 The guy cutting the Prime Rib gave me a slice that was a whole lot too rare for me ( I prefer my meat dead, not walking), so Karen took that slice and he cut me another off the end. Baked potatoe, roasted veggies, bun and a solid dose of Horseradish later we were sitting at our table enjoying a fantastic meal with our new acquaintances.

The band began playing some old school tunes (an advantage to hanging with an older crowd) which I love. There was a fantastic cake for dessert and a table with bowls of a variation of candies that we just couldn't resist. As I was going over to ask the waitress to bring me a slice of cake for Brad - if there were any pieces left over once everyone had one, I saw Karen snag an extra one for him. No questions needed to ask I guess.

After dinner we high-tailed it out of there... large crowds are not my thing so I was grateful when I noted by Karen's body language that she was over the gathering too.

I checked in on Brad to make sure he was okay and then went across the creek to Karen's and we played 3 games of cribbage... she beat me every time. Clearly she was cheating, right?! LOL

So about the Jeep.... after receiving several comments and realizing that we will have 30-45 days to get the edits done once we get it to Canada, it seems like we've decided to keep her. Sure it will be a bit of a nuisance but we think she's worth it. I still have it listed but will likely take it down today, we seem to have settled on taking her home.

Somehow I had it in my head that they literally wouldn't allow us to take her in to Canada and we'd have to leave it at the border. In hindsight this is clearly ridiculous... one of those blonde moments my gray matter seems so fond of I guess.

We had several inquiries about the Jeep but nothing too serious and she is still with us, so....pretty sure we're gonna keep her and take our chances.