Back to our regularly scheduled program...

So I haven't posted for like a week and a half... hey, I've been busy... family can be high maintenance, what can I say... it's always a mad house when we first arrive. 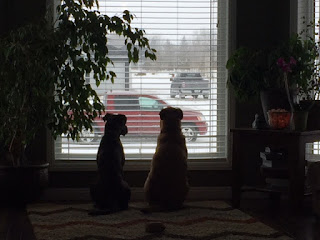 Max and Maggie watching out the window, so cute. 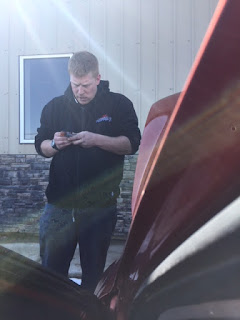 My good son Carey (youngest good son), fixed the blinker on the car he's letting us use. 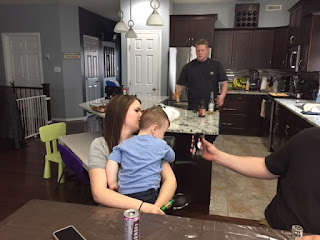 6 years ago my oldest son Lee joined the Army and I said I would send him a care package with homemade cookies.... I never did... he's never stopped bringing it up, so the other day - I made him cookies... they were good for an hour and then hard as nails.

Today I went to my Mother-in-Law's to redo her dryer vent... it was on the list... the old vent was white plastic and literally dangling by a string.. Don't know who did that, but I replaced the whole thing with some proper aluminum vent hose and a few elbows. The old one had no elbows just a lot of bends, not the best idea for a dryer vent... Anyway, that's done.

So after much ado, Brad and I have decided to take the loss on the FJ... you may recall that as well as having to fix the Jeep, we also had our FJ back 'home' put into the shop since Brad had to go back there anyway. We were hoping he would be able to drive it back, and bring some stuff with him. Unfortunately, yesterday we found out the work it needs (new transmission = $10K CAD) far breaches the value of the vehicle itself, so... that's that. He and Robbie are flying home on Thursday.

After a week and a half, it will be so awesome to have him and Robbie back. Being together for 13  years now and having spent the last 7 months in an 8' x 30' box together, it has been weird not having them around. Even after the last 7 months, I miss them.

So Brad had to go back 'home' because he got a subpoena for a court trial. Once he got there and learned that another witness was not there because he was 'out of province', I wanted to hit someone! That's another story who's day has not yet come...

I hope that one day I can tell the story of our life the last 8 years... I've tried to get him to write a book, without any success to date. Perhaps if he won't write it - I will. It's incredibly hard to believe but well worth the telling. Just not yet.

My brother returns tomorrow from his first ever week of nights... our family doesn't do night shifts well, so he will need to get himself back on schedule, not sure when he will get at the Jeep but genetically we are prone to 'just get at it' so I'll be interested to see if he's adopted... LOL  (spitting image of our father, so that's just a joke)

I will be moving in to my Mother-in-Laws tomorrow, no idea for how long... Brad and I haven't even attempted to discuss that yet there has been so much else going on. I cancelled our rental of that site in Alberta because we just didn't know at the time what was going to be happening. It looked like a minimum of 6 weeks to replace the FJ's transmission and we just couldn't continue to pay for a site we weren't able to use. Huge apologies to the folks we rented it from, I feel terrible about it but at the time it was all we could do.

We are going to have to do some serious buckling down when he gets back and figure out just what we're going to do between now and November... and residency will be a huge part of that.... gonna be a long summer.