We were at the mechanics at 9am yesterday morning for our RV Oil Change and were on our way by 10:30a.m. Very impressed with Redland Repairs in St. George, UT. I let them know we were travelling when I booked the appointment and they made sure that we were taken care of quickly and without fuss so we could get on our way. Much appreciated that.

But then... our Jeep exploded. We were driving down the highway a couple of hours later and suddenly I hear a POP, look at the rear camera and see all kinds of something something coming out of the Jeep hood. "Pull over, Pull over".... sure enough the radiator had blown a huge hole in the top... it seems, although we can't be sure, but we think the 4X wasn't properly set into Neutral and from what I can gather that means we likely blew the head gasket as well. I can't recall if antifreeze is oily but what was all over the Jeep was oily. I will be taking a good look under the hood now that we are stopped at a Sam's Club and not on the side of a highway.

But then...  half an hour later, we stopped for gas at the Love's truck stop in Cedar City, UT. I was able to pay at the pump which was quite the coup for me (I"m so excited about the little things), but when we went to leave... nothing. It wouldn't turn over or even try to turn over, just nothing. WTF?!?! Brad suggested calling Redlands in case they had touched something and forgot to untouch it.

Spoke to Dan who did our oil change and no he hadn't touched anything like that. He knew a guy in Cedar City and called him to come to our rescue. Which we thought was fantastic! Now keep in mind we are sitting at the gas pump with the unuseable Jeep attached and now the RV won't start. An hour later the mechanic showed up, he sourced the problem at the Starter... he left to see if he could find one... Brad also made some calls but could only find one in Salt Lake City (3 hours away)... Just as I was texting our (relatively new) friends in SLC to see if they would consider driving it down to us (otherwise we had to wait until Monday (when we are expected to cross, paperwork included)) the mechanic comes speeding up and he has a starter! Holy!

Also, while the starter was being put on Dan from Redland Repairs called to make sure we were being taken care of and that everything was okay.

So after sitting at the pump for 2 hours (and $400US) we were on our way. I found a new spot to stop, since we lost 2 hours drive time, right in Salt Lake City where our friends live just minutes down the road. Super bonus for them as they were going to drive an hour each way to see us at our previously designated stop for the night.

Bob & Barb picked us up from Sam's Club and we went to a pizza joint (California Pizza, I think but not sure). So great to see them again, they have 2 months booked at the Ranch next year so we're looking forward to that. It was great to catch up with them and a nice relaxing evening that was much needed after the day we had.

Bob even picked up the bill. Super duper nice couple and we absolutely love their company. Big thanks to you both. 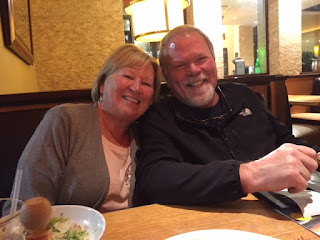