I have been 10 days now without a 'cigarette', I am using a vape - not one of those ridiculous things the kids are using that looks like a bong... but a much more subtle vape gadget - more age appropriate, if there is such a thing. That sounds ridiculous, I know. I was not interested in Vaping because what I'd seen were just these bong looking things and that just isn't - well, it isn't me.

The Aspire Breeze is the one we chose 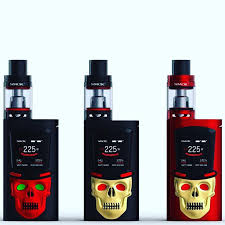 This is the one some of the kids are using... note the difference.

Anyway, 10 days now and while I am still getting the nicotine that my body craves, I do not have the smoke aspect and have actually noticed a difference in my lungs. Not that I was having lung issues, but considering I've been sick... I'm surprised by the noticeable difference I'm feeling.

I'm finding the last couple of days that I'm not connected to the thing as much as I was in the beginning. I was carrying it everywhere with me. The kid at the vape store did say that would happen. "You'll be tied to it for the first while and then you'll notice you start to leave it sitting around"... he was right.

Brad has started to integrate his vape in with his cigarettes, he's pretty concerned about switching but is completely impressed that I have had no indication of any trouble with it. No 'nic fits', no moodiness, no nothing...

The machines cost $35CAD each, the vape juice was $25 each (I expect 1 will last us a month) and then you also have to buy replacement atomizers... I don't remember how much they were but roughly $15 for 5... also expected to do 1 person a month. Considering we were spending approximately $900CAD on cigarettes a month (WOW putting that in print is shocking)... I'd s,ay we can manage $40/month...

The trick will be to reduce our nicotine levels as soon as possible before the price of this stuff goes up.......

9 Days ago we switched Robbie to a raw diet. I know I've mentioned before about sweeping up a chihuahua every day that falls off this dog and it drives me crazy... In another life I had a dog on the raw diet and absolutely loved it but when we got Robbie we knew we were going to be in the middle of nowhere so I put him on Kibbles & Bits knowing I could get it anywhere.

At the time the raw diet was still relatively 'new' on the market and wasn't easily accessible. In the coming years I forgot all about it. Now that we are back in civilization it was brought to my attention once again. I wasn't completely convinced that it would be enough to make a difference considering the amount this dog sheds.... I was shocked. Within about 3 days we started to notice a difference, and honestly, there is still some minor shedding going on but considering how bad it used to be.... I believe that over time it will disappear. It's only been 9 days and we can't brush anything off of him anymore so after a month..... I'll keep you posted.

The other benefits to the raw diet are that the dog doesn't smell like a dog... you know that smell, I'm sure... not that Robbie stinks, but if you get real close... anyway, in another week of so I will take him for another doggie wash and see what happens... Also, because the dog/cat is using all of the nutritional value of the meal, his poops are only a fraction of the size.... not exactly dinner conversation, but a bonus I thought I'd mention. There are other benefits if you want to check into it but these are the ones I can think of without looking it up.

I am on Day 5 of being sick. It totally sucks. My throat feels like there is a razor in there and I have a hell of a time swallowing. I've found that hot Jasmine tea really helps but there is only so much I want to pee in a day.... I've been basically drinking Jasmine tea back to back all day until just after supper... then 2 Advil helps for a while and another 2 Advil before bed allows me to fall asleep - at least for a few hours. Also, chocolate... seems to coat my throat and offer some relief for about 10 minutes. Handy if I'm just trying to get through until an appropriate time that I can take some Advil.
Posted by Gone Rogue at 7:49 am