Hospital, Yard work and an Offer

I managed to pick up whatever bug this is going around - no doubt from Brad who was sick with it for 2 weeks... I only had it for a week but I had other complications it turns out... I just kept thinking it would get better eventually as it did for Brad, but I had symptoms Brad didn't have. Now keep in mind that many years ago I had a stroke and it took me 3 days to get to a Dr, I don't go to the Dr unless things are dire.

So Sunday night, having intended to go to the Dr on Monday morning I was in such a bad way that I had Brad take me to the ER at Royal University Hospital at 11pm. I hadn't slept for a week, hacking, blowing, unable to swallow. I was given some ice chips to help while I waited, after hours in the waiting room we got put into a room an hour later we said to hell with it... by now it was 3am and City Hospital ER opened at 5am, maybe they could help me. So I stopped by the desk to ask for another cup of ice chips before I left. The nurse assured me the Dr was coming momentarily so we returned to wait. Within 5 min he was there, same guy we'd seen wandering around the last several hours. He did get me sorted in short order and they took some blood work to CYA and sent me packing with a 4 day prescription to clear up my throat. It did. 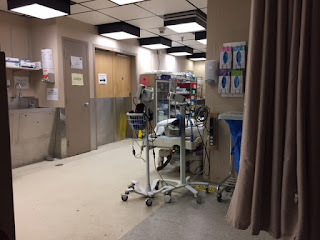 While we were waiting to be seen in ER, Brad went out for a smoke (vape). He got to talking to a guy, turns out there is a thing about Vaping... if the nicotine level is too strong it can effect your throat. Monday morning, I researched and found this website with nicotine levels from a large assortment of cigarettes available in Canada. They don't print it on the package anymore!

I had been vaping at 18mg of nicotine for 3 weeks... most cigarettes come in around 10 - 14mg... oops. Knowing that the vape comes in 0mg, 6mg, 9mg and 18mg I realized that what I needed was 9mg so I went back to the vape shop and the same kid was working, I explained what had happened (he was the one who told us at a pack a day we would need the 18mg) and that it put me in the ER. Not in a nasty way, just so that he wouldn't make the same mistake and potentially kill someone down the line with nicotine poisoning.

Content with that, I started doing 9mg and blended the 18mg & 9mg for Brad giving him a 13.5mg. Yesterday I realized that I was low on the 1 bottle of 9mg I had so went back to the vape shop for another and I also wanted two 0mg to blend with the 18mg which would then give us more 9mg once Brad was ready to reduce again.

The Manager happened to be working so I explained to him what happened with the ER and too much nicotine, he advised he would be discussing it with the kid we dealt with. Again, not nasty just making sure the kid understood the importance of what he is selling and how it can affect a person's health. The Manager asked me a couple of questions and it turns out there are two different coils for these vape machines... a 0.60 and a 1.20... the .60 is for a straight to lung inhale (crazy to me) and the 1.20 is for more of a cigarette inhale (this is us). The kid sold us the .60's.... effectively turning our 18mg into 36mg!!!! Holy Mother of God! That's like 6 cigarettes in 1.... No wonder I got so damn sick and couldn't swallow.

The Manager has sorted us out and while Brad (and I) are not impressed that this happened, at least the problem was acknowledged and dealt with to save anyone else from being adversely affected.

We've been puttering around the yard here at Brad's Mum's while she has been away on vacation and got quite a bit of weeding done, put some grass seed down as the lawn was getting some bare patches and even touched up some staining on the deck. I've been too sick until Monday to do much of anything and with Brad's back/neck problems it was a very slow process. 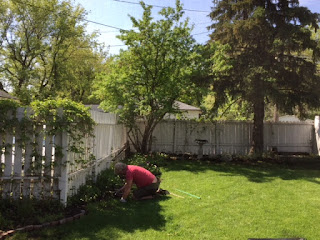 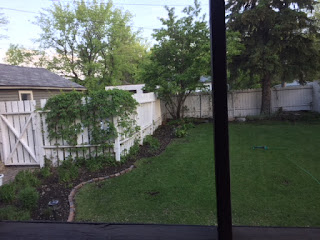 Late Monday we received an offer from our Realtor for our house that we have on the market. So excited! Anyway, it was low as you might imagine (well we expected it anyway, because of the state of the market in our locale), so we have countered. We are waiting to hear back from them as they made the offer and then had to leave on a business trip abroad. Their realtor assures our realtor that he will be able to contact them once they have arrived at their destination and that they are expecting a counter.

Meanwhile another woman was checking out our house so our neighbour took her in to see it. She loved it and apparently intends to contact our realtor to have a proper viewing with her husband.

None of this changes anything until it does obviously, but its a glimmer of hope and after everything we've been dealing with, we'll take it. So nice to get some good news for a change. I've even gone so far as to start thinking of what we will do once the house sells.... no spoilers though.

Incidentally, Brad started his new medication about a week and a half ago and all is well on that front.

Email ThisBlogThis!Share to TwitterShare to FacebookShare to Pinterest
Labels: For Sale, Home, Vape