Thursday morning Brad drove Deuce over to the Jeep dealership just a few blocks away, but just before he got there - the serpentine belt shredded. 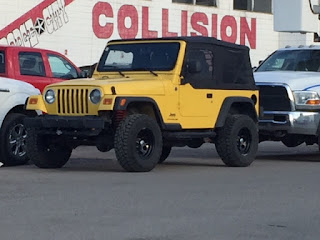 The Shop Foreman took a look at it and said it would likely be a few days before they could get it in to put a new belt on it. Aaargh, good thing we didn't give Carey his car back yet.

Brad had a hair appointment at 1pm so we drove over to the north end of town. While he was in there the mechanic called to say that the crank had been shredded too. Engine will need to be replaced or rebuilt. Wow, this just keeps getting better and better.

When we considered that we'd now have to spend several thousands on the engine, still had the lift kit issue and the daytime running lights, not counting whatever else they found wrong during the 2 safety inspections it needed to pass... Well, there was an F word in there somewhere but lets just say we decided to get a new Jeep!

We went to Auto Clearing because it was close to Brad's hairdresser. We made a deal on a 2017 Jeep hard top (we wanted soft, but could buy that later) in which they would put the tow bar assembly on the front for towing, talked to the financing guy and he was going to process it right away and likely hear back Friday morning. We decided not to say anything to anyone about getting a new Jeep because who the hell knows with banks...

Friday morning, we had been approved and needed to go over there to sign paperwork and leave a deposit for the work to be done. Huh? Brad was VERY concerned about this deposit BS but off we go.

He asked the finance guy why there was a deposit, guy said they would be doing a lot of work to the Jeep and we could then decide not to buy it. Brad said we would buy it first and then they could do the work... well, that caused quite the kerfuffle... they said the work was not part of the deal!... the salesman was brought in on his day off. Oops, Don the salesman says, I F'ed up... THIS was not our problem... the deal is the deal, where they going to stand by the deal or not.

Anyway, with a sour taste in our mouths we drove across town to Dodge City. I went in to find a salesman, and point blank told them we were not interested in any bullshit, was there a salesman who could sell us a car without any?... Gary Polishak.

We drove a few Jeeps... one was yellow, lifted, 4 door, winch, all the bells... I loved it as you might imagine if you've been reading this blog for awhile. But during the drive, it was terrible, real bad shimmy at 100 and just felt like the shocks were gone the rest of the drive. Not to mention it looked to be around 1/2 the size of our RV... waaaay too big. 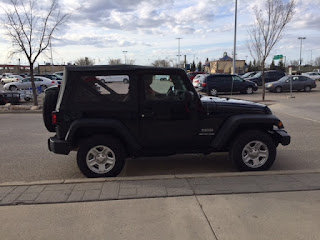 We don't think we'll name this one. Other than Jeep.

This deal closed at 5pm last night with no fuss, we made it to SGI before close and got a new plate for her. Today I will put all our bells and whistles into it and find places to put everything... my most favourite thing to do, actually. But first, my oldest good son is coming over and we're going to take him out to Broadway Cafe for breakfast. Brad's treat.
Posted by Gone Rogue at 10:10 am