As I mentioned in a previous post, we have changed Robbie's diet to the Raw Food Diet. He has been on Kibbles & Bits since we got him 8 years ago. I've also previously mentioned that this dog sheds a chihuahua every day. When we got Robbie we were moving to a desolate, isolated part of the country and being unsure what dog food would be available I opted for Kibbles & Bits because I was confident we could get that anywhere and it turned out we could.

In a past life (ex-husband), I had another dog that was on the Raw Food Diet and she didn't shed AT ALL. With the amount Robbie was shedding, I wasn't sure it would make a difference but decided it was worth a try now that we are in civilization once again... He has been on the raw diet now for 2 weeks and it has made ALL the difference. We started noticing a change after just 3 days on the new food but now 2 weeks in, we have brushed him, washed him, brushed him again... almost nothing is coming off of him. 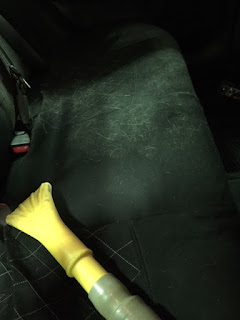 After only a couple of days in my son's car... this was the mess 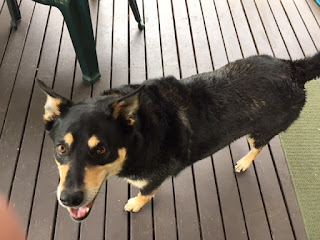 On the Raw Food Diet and loving it

If you have a shedding dog issue, get your pet on the Raw Food Diet. It works. When you consider that dogs are carnivores and not accustomed to this dry chemical crap 'they' have convinced us is what your dog needs... it only makes sense. Anyway, its working for us - incredibly so and we are grateful for that.

Saturday night my son and his wife had asked us to babysit while they went to see a comedian they like that was in town. Kevin Hart. Having not had little ones for a hell of a long time, we were very scared of what we'd have to deal with, but fully braced and ready for whatever they could pull out of their hats - we arrived at the allotted time and off the parents went...

We made sure the kids ate all of their supper, gave them popsicles and took them out to the yard to blow off some steam. Once things cooled down outside we went back in the house and kept them amused until bedtime. 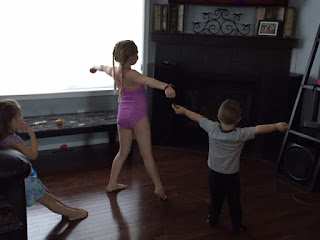 I don't know how the kids (parents) did it but my kids never went to bed that easy. Not a once. They got pyjamas on and climbed in, asked for a drink and were out cold instantly. Super duper good kids and us old fogeys were stressed over nothing. Angel children - they get that from my side!

Our youngest Granddaughter had a dance recital on Sunday and her parents bought me a ticket ($30 - insane to watch a 4 yr old in my book) so Sunday was all about dancing. 3.5 hours watching everyones kids dance until she finally came out for her 90 seconds of fame. Her troupe did a great job, especially being so young. I took a few pictures and her mother got a video. 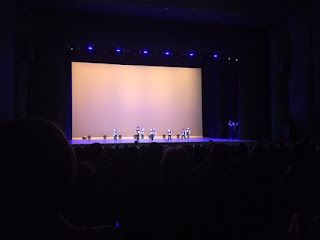 TCUP is no small stage 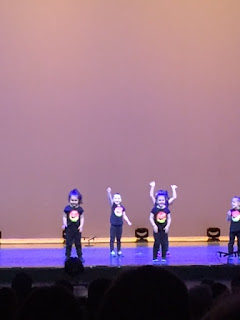 I've been having great difficulty since hitting the road with trying to keep up with my blog, twitter, instagram and youtube. In fact, I ditched youtube shortly after heading on our adventure - way too much work. Because I couldn't keep up with it, I also stopped bothering with twitter and instagram.

Well, I've decided to give those one last attempt. I went through my follow list and edited it down to a more manageable size. My apologies if you didn't make the cut, I tried to keep those I was familiar with and who I recognized as interactive. If I balls'd that up, I will notice and begin following again. I just had so much on my feed that it wasn't functional.

I have already begun adding people back on but I do need to keep it to a reasonable number otherwise it just all becomes a blur when your scrolling and the personal (I want to say relationship... ) vibe with each that I follow suffers.