Karma from a last life?

We've really had a bad decade...

Brad has had a lawsuit going against the Government for many years now because of something that was done TO us...

As you know there is the house situation done TO us... see previous post.

Now we are in another conundrum - also being done TO us... and for no apparent reason.

Both Brad and I are the type of people who do anything and everything for other people. Perhaps that's the problem...? ... Is there such a thing as too nice?... Are we constantly getting shit on because people think we're nice so they can?....

I am officially pissed off.

My last post was about helping a couple with their bathroom (they are great people, this is not about them at all).

Last night we went for dinner (as we often do) and upon leaving we noticed that the Art Gallery next door had all the lights off but the door wasn't quite shut or locked... nobody in there... so we made inquiries and phone calls and found a way to contact the Gallery owner, we waited until they arrived (also not about these people, they were very kind). 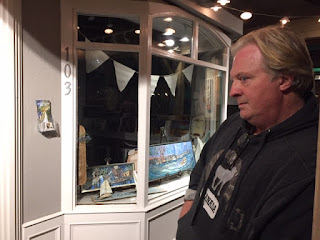 Just a couple of examples, this is who we are. So why is it that all this bullshit happens to us? I don't get it. But I tell you what... I'm over it. Is this some kind of residual karma from a last life that we are not aware of?!

What next? God help the next guy because at this point - I am that woman scorned!
Posted by Gone Rogue at 4:38 pm