The edge of the Polar Vortex is upon us. It was supposed to begin snowing at noon, so Brad and I were out first thing to remove the blackberry bush clippings that were lining the edge of the entrance road. We weren't at it long when the boss man stopped by and we stopped for a coffee and a chat, then right back at it and we managed to get all the clippings that were in view of any current campers.

Still a bunch up Tenting Ring road, we can get to that once the snow melts, it was more important to clear up the unsightly stuff. It got quite cold (it's all relative, I know) so we called it a day and tucked up in the warmth of our RV for the night.

When I took Robbie out late last night, this is what I found: 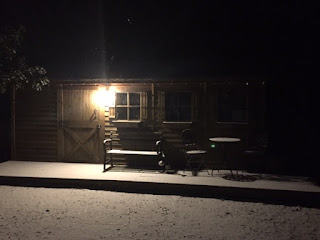 A sprinkling of snow 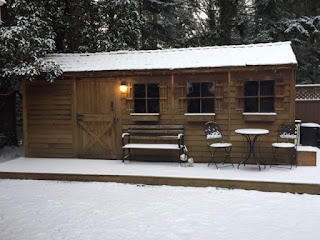 About 2 inches of snow

I was tempted to run back and turn on the Xmas lights strung along the roofline of this outbuilding but since its daytime... tonight I will put them on though. I love this building, its so cute... its like living in a western film, the office building looks very similar too. I'm tempted to put red checkered curtains in the windows -- might just, but I'll have to change out the Xmas light bulbs as they are blue at the moment.... maybe blue checkered curtains? No, red is better me thinks.

I will put a poll up on the blog and you can tell me what colour you think is best.
Posted by Gone Rogue at 9:42 am