Not much to report I'm afraid, yesterday I saturated the ceiling again hoping to remove more of the stain but to little or no avail. Still, I'm happy with the difference from where it started.

Today, as it is still fairly cool outside (high of 7C) I worked on cleaning the windows - lots of tree & leaf bits in the runners. An old toothbrush and some elbow grease and for the most part I was able to remove all the biodegraded gunk out. Too cold to wash the windows really so I decided to leave that for another day. 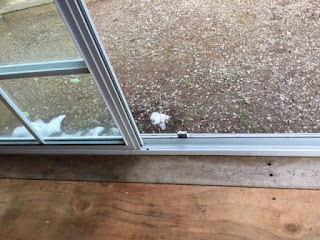 The best part of this project so far has been that the bleaching has removed the old smell from the space, the worst has been that I put PineSol in the window runner water -- new stink. Fortunately, PineSol is a fly deterrent so maybe the effect will last going in to fly season - though likely not.

According to those who never get it right we will be warming up here as of Monday... tick tock.

Because there is still plenty of snow on the hills and in the well shaded sites, there isn't much landscaping that we can do so I would like to take this opportunity of 'quiet' time to get as much done on the conservatory as possible.

Hoping to be able to get the wood for the potting area floor this weekend but that is unclear right now. The floor would be a good project to do while waiting for the temps to rise, it must be 10C to do exterior painting and that is still 2 weeks out - again, according to those who never get it right.

I haven't checked, but assuming its a reasonable temperature tomorrow I think I shall tackle a paint smear on one of the window screens... look close and you'll see it on the right window. 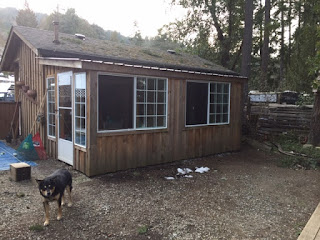 Might even go all out and scrape off a paint drip I noticed today on one of the windows themselves and there is a 2nd blind to take down yet. I took the other off the other day when we took out the shelves but failed to notice the one in the potting area.

Doesn't seem like I'm doing a lot in a day but the phone and emails are coming in more and more regularly so we have to keep stopping what we're doing to deal with inquiries, bookings and the like.

In the last picture you'll see a pile of branches on the right that was debris from the snowstorm that was recently uncovered by melt, yesterday we had another gusty evening so there is even more to be raked up.

I have pretty much decided to put my 'solar heater' into the window on the left side of the door. That spot gets the most sunshine in winter ( I did the online test for solar directional blah blah) and it will mean not having to drill any holes in the outside of the building. It will be completely contained within itself and I will simply sit it on the 4" window sill, once I know how its working (good/bad) I can always attach a hose of some sort and push it along to the conservatory end of the building if necessary - and it can be easily removed in the height of summer's heat. Hoping that the windows will add to the solar heating of the already enclosed heater.... anyone know otherwise?
Posted by Gone Rogue at 6:06 pm