The making of a Conservatory

Okay so the snow is almost gone... enough that we can get into what we are calling the 'Conservatory', What?! It has windows....... work with me people.... :D

I have a basic idea of what I want to do in there and as much as I'd love to insulate it and do all of that, we are just not ready to go to that length as yet. So likely a splash of paint and some sort of furnishing and while I have thought about putting in my long awaited Rocket Mass Heater for some spring/fall warmth, I'm pretty sure the owner wouldn't agree for insurance purposes so no point in even asking.

Here is what it looks like at the moment: 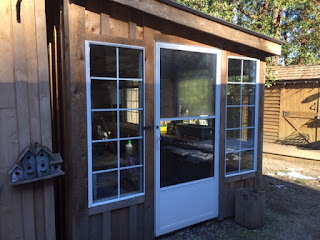 Entrance. Not much will change here. 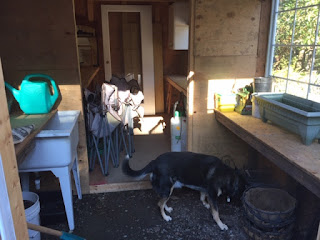 This is an area for potting plants.
I intend to keep this, though it will be edited with a floor and likely paint. 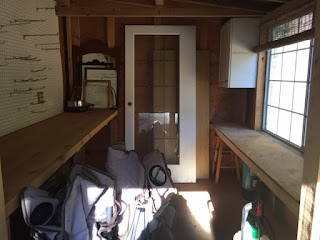 This is the main 'Conservatory' part.
We haven't measured it yet but we think that door might fit where this picture was taken from, which would help in maintaining any heat we were to create in some way. Open to suggestions on heat also.

While we do not have any specific plans as yet, the general idea will be to empty it. Removing these shelves will allow us to get a better sense of the space, likely paint it white and add some furnishings. I'm torn between just having camping chairs or building some sort of seating that I can make cushions for...

Since I will not be putting a Rocket Mass Heater under the windows as I had originally conceptualized, the entire space opens up all the more options for other seating arrangements. I'd like to try to use the current blinds (wicker things) as an outdoor shade thing somehow once we learn the 'hot' areas of the outdoor garden space. I think white curtains, while they might suit the space better, will likely not hold up well in an outdoor environment such as this so perhaps a pop of colour or texture on the windows will be the best bet.

If anyone has any other suggestions, now would be the time to share them... I am open to anything as its all up in the air at this time... The space is approx 8'w x 10'd.

The intent here is to create a comfortable space where we can lounge of an evening and visit with family, friends or just the two of us and our loving puppy....

Speaking of the puppy... Robbie has a 3' round dog bed which I want to incorporate into the space but I'm concerned about bugs/mice, etc.... I suppose I could put the stuffing inside a large garbage bag and include some Irish Spring (possibly shaved) inside the bag as well... anyone have any better ideas. We don't know what the mice situation will be but I don't want to find out the hard way either.

PS Yes, Irish Spring works and they are cheap as borscht at the Dollar Store.... buy as many as you can reasonably afford, cut them in half and put them in every bay and around tires ( I rub the bottom of the tires with the soap first - including the back side), leaving one tucked out of site behind each tire. I also put a couple in the engine compartment.
Posted by Gone Rogue at 11:39 am