Changes to the plan

Okay so as I mentioned there was a bit of fun over the 'Conservatory' name for our little shed remodel, so we have changed it. Deb at Kastle's Journey said it should be the 'Sitting Room' and it just seemed so obvious that we ( read: I ) changed it instantly.... big thanks to Deb as I was drawing a blank for anything good.

When the owner came by to do the lift of the building (to allow for better air flow underneath), he felt that it should be insulated and a proper job done of it, keeping in mind that it is still a shed of course. Not about to argue, we agreed and we are moving forward with the build now that the lift is complete.

The walls that were dividing the seating area from what was a potting area have come down and we now have a much larger space to work with. The new floor has been added with vapour barrier under the entire shed. 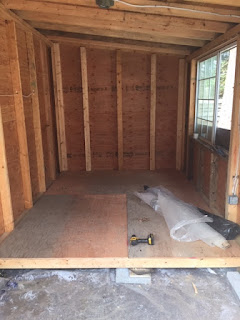 After the lift, with the vapour barrier 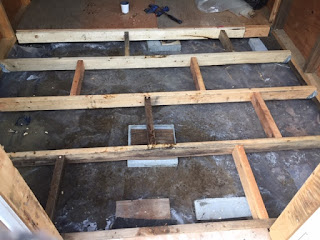 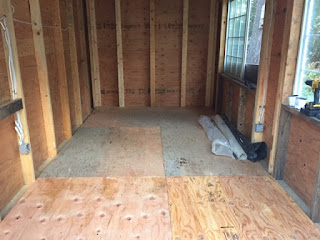 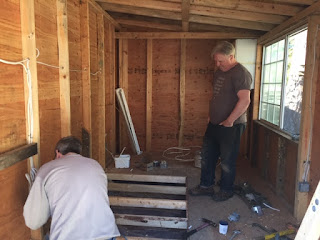 Even the owner was involved

There is meant to be some rain today, according to those who never get it right - but not until this afternoon, so I think I will do the painting on the ceiling this morning. Because of the mould issue that was in this space, having bleached it to oblivion, I purchased a mould deterrent paint which will go on before the insulation goes in. It will only go on the problem areas so it won't take very long to do but could save many problems later.

This sitting room is now 8 ft wide and 16 ft long, its like having a 2nd motorhome. This will be a great addition to our little Manager site here at the campground and I'm really excited about it. Not only will it be a nice added space for us, but if/when we move on it will be a great advantage/incentive to those who come after us.

Now that the floor is down, we will be able to work in here whether its sun or rain which is good news since the rains delete the snow and when the snow is gone -- there is other work to be done... and the sitting room goes on hold.

The campground owner has been supportive of my idea to create this little outdoor space and I'd like to thank him for allowing us to do a more extravagant space. I had originally figured I'd make it just a comfortable shed but now it will be an actual outdoor space and that is awesome.

With it now being a wide open space, it should not take very long to get it sorted and ready for my furniture builds... speaking of which, I have found a second and I believe much easier/better option for the couch/bed that I plan to build but I'm still looking into both options to figure out which one I will use as I want to use as much of the salvage wood around here as possible. Sounds like a jimmy rig but trust me, it'll be great - you will see.