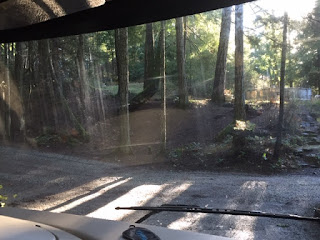 View through our front window, don't think I showed this yet.

After Pickleball this morning, I went for lunch with a couple of pickle friends, was originally meant to be a coffee but turned into a lunch. Had a good chat and visit then back home where Brad was chatting on Skype with his brother in England, nice to chat with him and catch up. We then decided to go for a hike on a new trail just up the road from our new place. Sure glad we did, what a great trail. 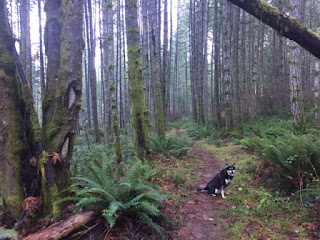 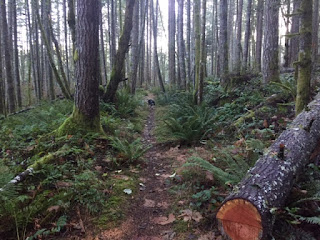 Lots of deadfall, likely from the big storm last winter. 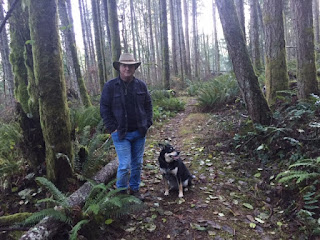 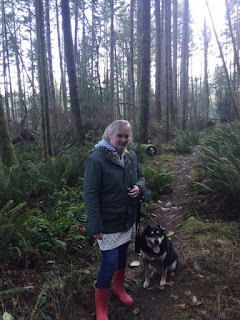 Brad insisted on taking a pic of me, I hate pics of me.... as you may have noticed... and I just so happened to look like I've been dragged through that bush yonder - and backwards at that. 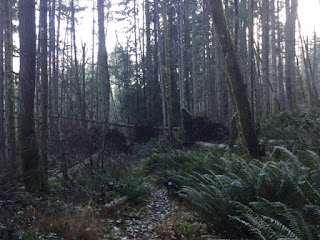 Several trees tipped up from the roots, likely during the windstorm Dec 21 last year. 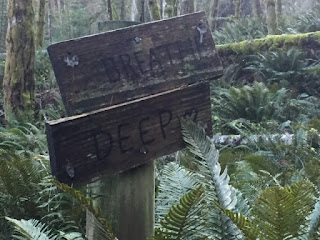 Not so subtle reminders of where you are along the trail 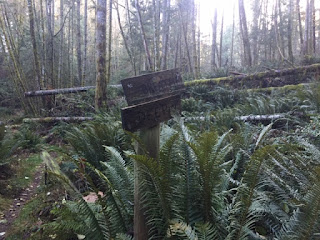 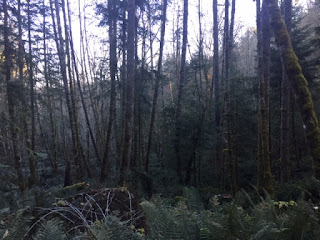 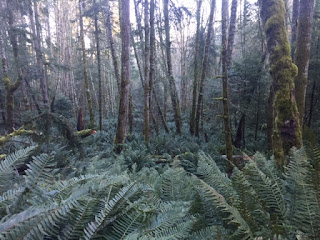 A forest of ferns

A panoramic that doesn't appear to work so well on Blogger 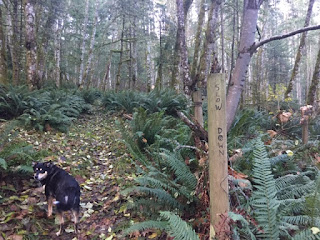 Again with the reminder note 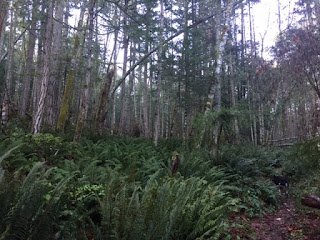 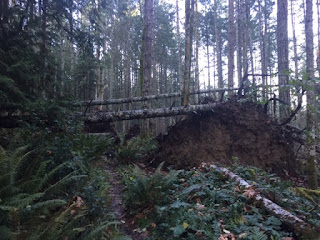 Tipped tree from the back side 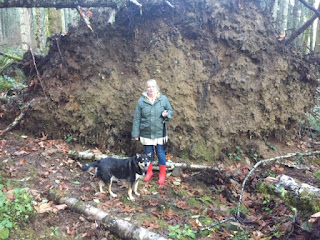 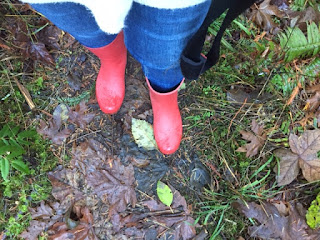 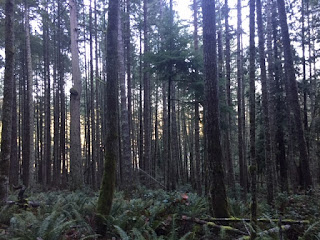 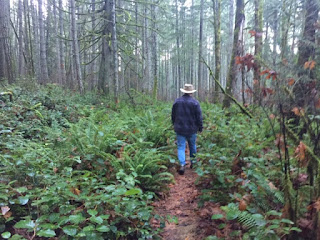 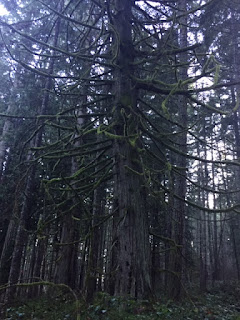 Beautiful tree. Those holes in the bark are really portals to Fairyland and Dixie Stardust

There is a property for sale just down the road and we talked about slipping up the driveway to take a look (most houses on the island are not visible from the road) but chose not to and not a minute later as we were walking along the owner of said house came home - so that was a good decision... could have been VERY awkward. LOL 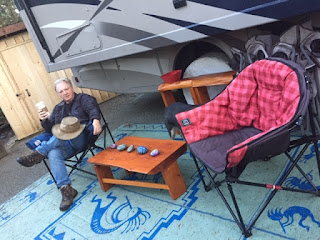 Once home we pulled the chairs out and relaxed outside for awhile, its been raining off and on for several days now so it was nice to be outdoors for a change. 'Apparently' we are through the worst of it --- so 'they' say. 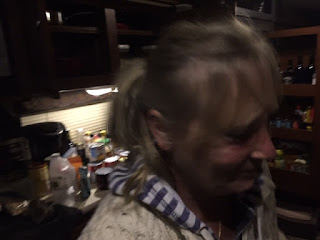 I decided I'd had enough of unorganized cupboards and set about putting them straight... Brad took several pictures but this is the only one suitable for publication, the rest all have extra extremities - okay fingers so it doesn't get wierd - showing....

One thing, for me at least, living in an RV is a constant game of Tetris and depending on what stuff you have and how much there is of it - rearranging is always required. With Xmas only (as I heard on the radio today) 2 paycheques away - for most people... and my Dad and now possibly Brother coming for Xmas, I thought it best to sort it out now rather than be stressed about it later....

I'm hoping my son who has just re-enlisted in the Army and been posted back to his old post on Haida Gwaii might just come down for a day or two but no word on this yet. He is, as we speak, driving out there from Saskatchewan.

Incidentally, even though Haida Gwaii is an island that is just right there not that far north of our island - on the map... you have to go to the mainland, get to Prince George and then cross by ferry to get to it from here! Insane... 27 hours away that trip is, so if he doesn't make it for Xmas - that's why.

I'm very happy to be back to writing my blog, I wasn't sure I'd be able to 'get into it' after being all but absent for so long, but I am enjoying it again. And I have some trip plan ideas that I haven't even mentioned to Brad yet, so hopefully we can get some travelling in now.

Can't remember if I mentioned it in a previous post but my Dad is coming for Xmas, then he and his fiance are going on a cruise through the Panama Canal in January and the wedding is in May in Ontario, then they are planning a trip out here so other than going to the wedding, not sure how far we will actually get this coming year but a girl can try. And Brad will be the first to tell you, I can be very trying... :D :D