Having made progress with my French Vanilla Cappuccino this morning I was full of energy (maybe not full...) but I did some work on the garden and went with Brad & Robbie on their daily walk in the afternoon. 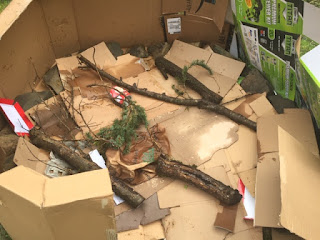 So I trimmed out the keyhole with cardboard,
not pretty but certainly cheap - so glad I've been saving cardboard the last few months just in case I could do this garden. I used a few larger pieces of branch just to hold the cardboard down, then 1-1 1/2" branches for the rest. 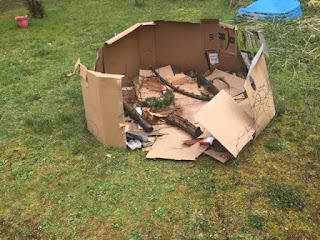 Saturated it with water 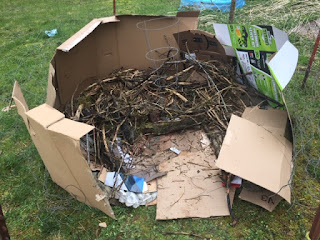 Began loading it with dead wood from the forest around the property, still plenty more to add yet 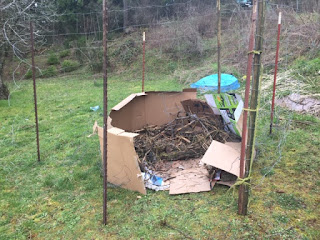 Our landlord put a second circle of deer fencing around it for me to help keep the deer out.
Very thoughtful of him.

I need to create the walkway to the keyhole center with something I have yet to concoct but I'm sure I'll think of something and create a 'doorway' so the deer don't get in through the front door.

Fill it in with dead wood branches, leaves (carbon), greenery such as grass clippings- sloping down from the center, then a layer of animal bedding (nitrogen, to help break it down) from the chicken coop another layer of dead grasses - and a roughly 6" layer of garden soil to finish it off and it is ready to == Plant.

Each layer gets saturated with water as you put it together and a compost in the center of the same vein (carbon/nitrogen/greens) to feed/water it throughout the growing season. Sounds simple enough, right?!

Minimal weeding 'they' say and high yield... I'll keep you posted on that. My garden is growing pretty good in the pots across from our site, I look forward to transplanting those in the garden and then starting tomatoes in the pots.

If this garden works correctly, each year it will only require refreshing these main body layers before replanting. Assuming the deer don't destroy it first.