I started the Keyhole garden

A couple of weeks ago Brad's computer crashed. So we took it in to Best Buy's Geek Squad in Duncan... needs a new motherboard or some such.... sending to Vancouver... yadayada $600 later they are sending it back via courier -because we are in Quarantine. Well it wasn't wrapped or protected in the box and when we opened it, voila -- smashed to shite. As you might imagine that caused a stir, so we called Best Buy and Brad had to 'suit up' and go across to Duncan with the computer, they would replace it for us.

Turned out they didn't have one so they gave Brad $100 to go to Nanaimo to get one that would work and they put all of his files etc on an external drive which I then just had to transfer to the new computer. The 'kid' (just 19 yrs old) was fantastic! I will be calling and getting his name then writing a very favourable review for this, I even had a problem with the upload and he talked me through it on the phone when I called the next day. Apparently, he is the only one who was willing to work during the current situation so he won't be hard to find. 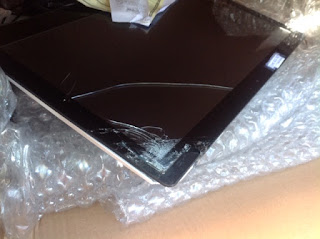 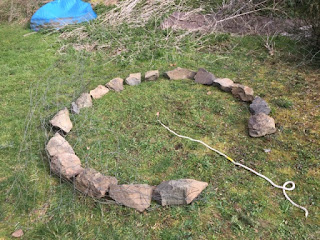 The making of my Keyhole garden

Keyhole gardens are great for drought prone areas, which we are in - believe it or not... we find this hard to believe given the tic tic tic we've listened to for the last several months.

From Wikipedia:
A keyhole garden is a two-meter-wide circular raised garden with a keyhole-shaped indentation on one side. The indentation allows gardeners to add uncooked vegetable scraps, greywater, and manure into a composting basket that sits in the center of the bed. In this way, composting materials can be added to the basket throughout the growing season to provide nutrients for the plants. The upper layer of soil is hilled up against the center basket so the soil slopes gently down from the center to the sides. Most keyhole gardens rise about one meter above the ground and have walls made of stone. The stone wall not only gives the garden its form, but helps trap moisture within the bed. Keyhole gardens originated in Lesotho and are well adapted to dry arid lands and deserts. In Africa they are positioned close to the kitchen and used to raise leafy greens such as lettuce, kale, and spinach; herbs; and root crops such as onions, garlic, carrots, and beets. Keyhole gardens are ideal for intensive planting, a technique in which plants are placed close together to maximize production. Plants with wide-reaching root systems such as tomatoes and zucchini may not perform well in a keyhole garden. 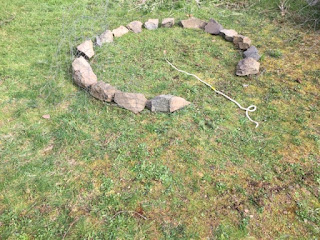 My original outline was incorrect at 6' radius (12 ft diameter) - which should be a 6' diameter (total width). I thought it looked a bit big... sure enough, blonde moment. Redo.

Although it doesn't look like I did much, the chicken (deer) wire was tangled in the back forest and had to be untangled, removed, stretched and flattened. I also had to gather the rocks which required driving the Jeep (because the truck won't fit down in the area) down to a spot of the property where I was able to grab the rocks I needed then after returning the Jeep to our site, I hand carried (in a shopping bag) a couple/3 rocks at a time up the steps and across the flat to the location we have chosen where plenty of sunshine will provide the best spot for our garden to grow... I then 'tucked' the wire under the rocks while twisting and turning it to create a circle.

What I haven't written about yet is that I've been struggling (not 'sick') with my muscles for about a month now, turns out I am short on Magnesium...  Yes, yes it is a self-diagnosis with Google's help, but I am comfortable with that given the world today (Dr's are busy with more pressing things) and that all of my 'symptoms' fall under 2 conditions both of which are caused by low Magnesium - and given that Brad has already (3 mos ago) had a Dr diagnose him with low Magnesium for similar symptoms. At the time, I said that if he was low on it and we eat the same things then I should be taking it to, and I did - for a few days - until I forgot... and didn't think anything more of it... until my 'symptoms' got bad enough that I googled them.

So I've been struggling just to move around and had a 'tingle' under my nose - but knowing it is essential to keep moving, I pushed on with the garden. Anyway, I've been taking Magnesium now for 3 or 4 days via pill form and also topically and it is much much better. Yesterday (Saturday) I had a nap (shocker, I know) but the day before (ie. Friday) I had 2 naps. That should tell you how bad a state I was in... because I DO NOT NAP -- like, almost never... I have also stopped the new 'diet' and returned to my less food 'normal' diet.

Warning: Too much information: On top of this back in January I tried to stop drinking my French Vanilla Cappuccino every morning (which helps my IBS) because clearly that can't be healthy... unfortunately the week that I did not take my drink backed things up so bad that even now I am still 3 weeks behind (corn is the tell tale indicator of this). Trust me this whole thing is Too Much Information... so I will leave it at that.

Suffice to say, I've been a bit sluggish the last few months. 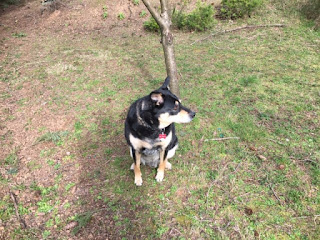 Robbie helped me with the garden 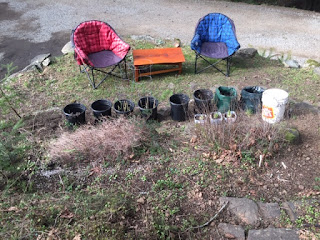 A sunnier spot across from our site

Brad wanted to move the Jeep closer to where I needed the rocks but I begged him to leave me to it because it was forcing me to use the muscles that I knew I needed to maneuver and he eventually - though reluctantly, left me to it. I took a few rocks at a time and Robbie tagged along so I could send him for help if I needed it. 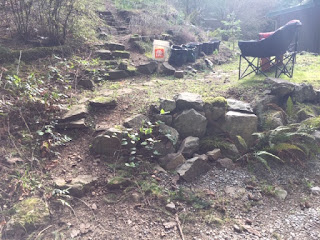 Not where I was taking the rocks, this is just half the climb up to the spot where the new garden is further in the backwoods clearing.