When Brad went to the wreckers the other day he came home with a new bumper and a new grill -both of which had been a sore point on the truck because the bumper it came with was pushed up and crunched and the silver wrapper on the grill was bubbled. 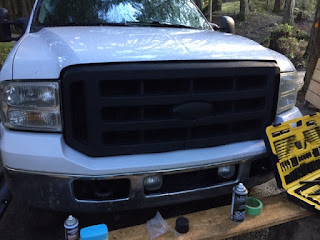 The new grill came black so Brad sprayed the Ford emblem to match. 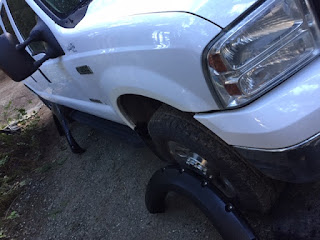 He had also ordered wheel trims which arrived and were put on in short order. 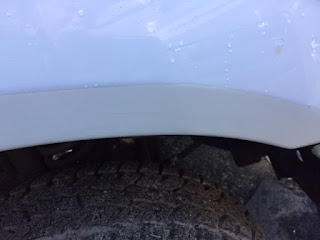 Before attaching wheel trims, we sanded, primed and repainted the body where some rust was a concern. 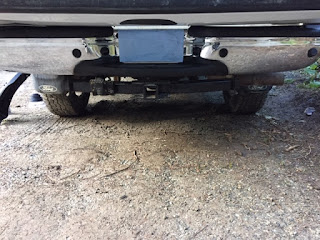 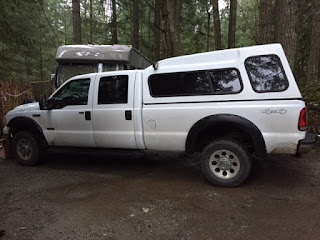 Looking good.
When we return from the trip, the cap will be removed and a tonneau cover put on - assuming we keep the truck at that point... 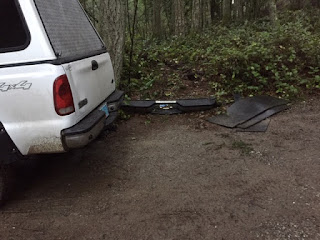 New Bumper and we also have our hard earned Veteran's plates -- took a year -- ! 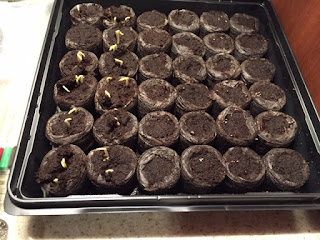 Left to right, my peas are sprouting on the left... and some herbs on the right. 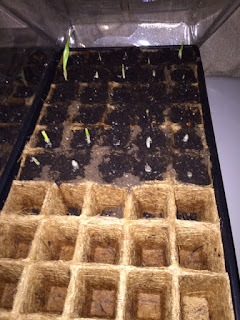 Garlic and Green onions.. no carrots (in between them) yet. 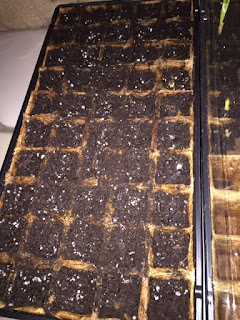 Today we took the truck to Duncan to have our taxes done at H&R, Brad has always done them but last year we had so much going on and we liked the girl so went to her again this year.

With that pleasant chore done -- obviously a return is coming, eventually-- we drove through Victoria to a UPS to ship out a faulty Amazon purchase that caused a breakdown on the side of the main road here on the island.. We had to re-order one from Ford and it was here the next day and all turned out well.

The Amazon company authorized a return and we simply had to drop it at UPS -- not available on our island and permanently closed in Duncan... we then caught the ferry home at Swartz Bay and got home just in time for supper.

Speaking of supper, Jan & Steve called yesterday from Victoria to say they have had a change of plans and will be available to visit with us when we drive through Ontario after all. I asked if they wanted to do dinner -- so Brad & I went across to Sydney last night and met up with them for supper at a beautiful little stone building turned restaurant. Surprise bonus: they bought us dinner. Love these two LOL They are heading back to Ontario very soon so this would probably be our last time with them before seeing them in Ontario on our trip.

We were able to show off everything we have done to the truck since we bought it as they were there when we originally looked at the truck. We are proud to have accomplished all the things we wanted to accomplish before this trip, and then some.

We stopped at Canadian Tire to return a couple of items including the pet barrier (Robbie won't cross the front center seat if it is up so we didn't need the barrier in the end), and ended up spending more than we had returned, including a backup camera for the truck - with this huge cap on it it can be hard to see just where you are and we're not used to the size of this thing yet so this backup camera just ensures we don't hit something.

Also, the other day we received the necessary permissions to do what I wanted to do with this: 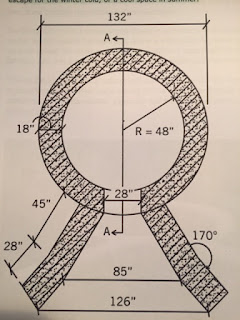 So that is exciting and something to look forward to. Some detailed planning has begun with plenty more to be done yet and then we can settle on a timeframe which could be complicated with our trip causing a significant delay, no doubt...

I think that's everything I had to update you all about... probably not but its all I can think of at the moment.