We were set to start a new house sit today at 1pm and around 1030am Brad went to town to grab a coffee before we loaded the Jeep and set off across Salt Spring Island. 1230pm and he hasn't returned... something is wrong. Or is it? You can never tell with men, can you?!

Has he gone by Buzzy's and got chatting and forgotten? Do I take the big truck and go without him? Where the hell is he? He knows we have this appointment to meet the owner of the house...

Now at 1130 ish I was talking to the landlord about that diagram I've been teasing you with... and switching the laundry around the same time... Well at 1245 I got up to go to the bathroom and just happened to push the button on the phone to check it as I passed by. Sure enough Brad had called around 1130 from the Police Station. Someone had driven into him and he was heading to the ER....

W T F?!?!?!?!?!?!  I grabbed my purse and took off running to our friendly neighbourhood landlord for a drive to the ER and he quickly obliged -- thank you, kind sir.

Apparently, after checking our mail Brad had stopped to help a little old lady who's car wouldn't move and she was stuck in the driving lane outside the post office. She was not strong enough to strong arm (car wouldn't turn on) the car while he pushed so 2 others joined in the effort, once she was secured in a spot out of harm's way the others left and then Brad turned and began walking back to our Jeep. BAM!! Some guy in a little yellow smart car literally whipped out of his parking spot -- backwards -- and straight into Brad. As per, Brad did not move (anyone who knows him, knows what I mean by this) --anyway, the guy mouthed to Brad that he was sorry and drove away.

WELL! Several people witnessed this event in the parking lot of the local post office. Brad got the plate number and went to the cop shop trying to remember the plate number while trying to speak to someone at a small island police station... suffice to say, he got the last number wrong. However, he had seen the car turn towards Moby's and so when the police insisted he go to the hospital he decided to find that car enroute to the hospital (opposite direction)... and he did. Directly across the street from Moby's there it was at the Harbour House Hotel.

He provided the police with the proper plate number and they were off to do whatever they do when someone hit and runs a body... I'm not sure what that is, but I'm damn sure it isn't good for that guy.

Doc in ER says he has whiplash and will likely have a lot of bruising but nothing is broken so he'll be sore for several days to a week or 10 days before hopefully recovering. Clearly, Doc says, he has been thrown out of alignment (his RMT and Chiropractor are not going to be happy about this either).

Even with all of that going on we still managed to arrive shortly after 1pm to meet the sit and then went home and Brad looked after Robbie while I loaded the first of two loads of stuff to haul over to the house sit (2 door jeeps hold almost nothing, do not buy one)... the truck would make sense except this island is not designed for such a large vehicle and I'm not sure it would make the turn into the driveway to be honest... the Jeep doesn't seem like it would fit either but it does... 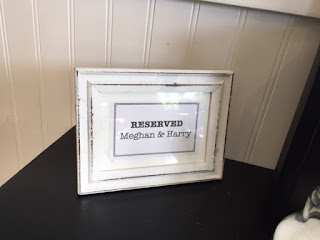 On the way home we stopped at Buzzy's for lunch - it was a bad day after all. They couldn't believe Brad had been hit by a car! And yet completely believed he had been hit by a car as people drive crazy on this island, its just insane and summer hasn't even hit yet. Barbra Streisand has been punted for Meghan and Harry, she declined to comment. 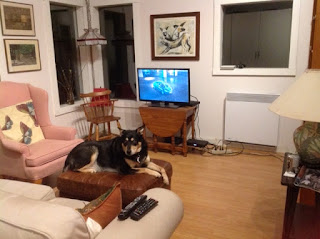 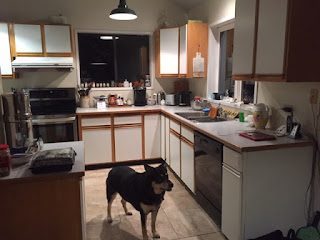 Spent half an hour cleaning the kitchen so I could make dinner only to realize I didn't have anything out so Brad drove to town and grabbed Pizza for us as Big Brother Canada season 8 began at 7pm and I was still scrubbing the kitchen at 630pm. 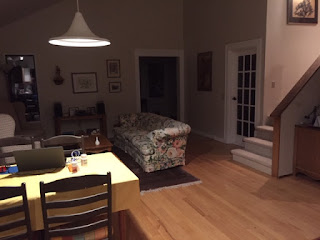 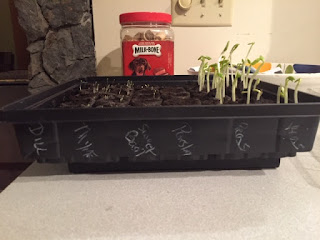 Remember my peas? With herbs on the left. Coming up nicely. 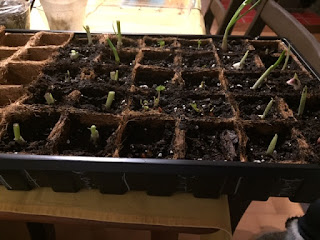 In yesterday's blog post I'm sure I posted a pic of this and no carrots were coming up yet (middle) between the green onion on the left and garlic on the right... well 6 have sprouted today. Still no peppers but I learned today that peppers take 1-4 weeks to sprout depending on the type and I've no idea what the type is other than Organic...so I wait...

Okay so that diagram: has been squashed I think. It was an earthbag dome building we were planning so that company would have somewhere to stay when they visit but after much consideration and with the layout being so sloped and nowhere to drop a literal tonne of dirt except at the bottom of a big slope we have decided to just build a normal cabin. Given our trip and the mountainous amount of work to build an earthbag dome, I think its safe to say we have chosen another path with the cabin idea.

Now I say this but we haven't exactly all had a chance to digest everything that has happened today, however I spoke to the landlord and mentioned it to Brad today and I think everyone seemed to be in agreement on the cabin. I will revisit this again in a few days once Brad's pain level normalizes and we can speak more to the landlord. It was exciting while it lasted but I think with everything we have on our plates already that this is probably the best option all around right now. Sorry Meg/Mum.