Given the S*^#@! storm that has become our world today, everything being cancelled and/or closed... Disney... wow, you know it's bad when... even the cruise lines are shutting themselves down for 2 months... where is the leadership - it's so bad down in the US that there are just no words.

When businesses are voluntarily shutting down, but the leader (who is likely infected won't test and insists the world is rainbows and chocolate) - when Corporatocracy is regulating itself at a financial loss because the government just can't bring itself to the new reality... and is putting people at risk by refusing to test because he doesn't want to lose control of the economic profitability of his own businesses. It's time to worry.

So we have self-quarantined. According to those who haven't a clue, we do not have any cases on this island as yet but we know its coming and with a minimum 2 week incubation - is really likely already here, we decided to shut it down last night.

We also received a message from our house sit which was scheduled for today and they have cancelled their holiday because our Government (Canada) has advised all citizens against travel and is considering closing all borders and advising people (including RVers) to get home... so that is great, we were kind of hoping they would cancel - as much for them as us. 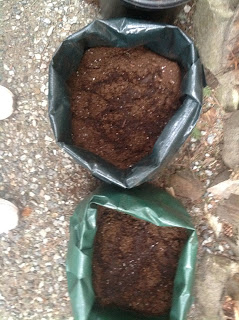 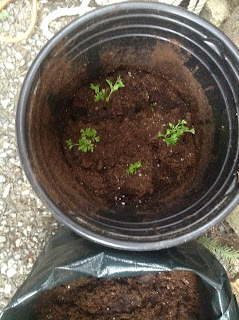 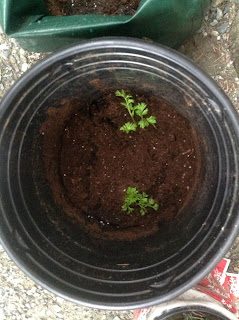 2nd pot, each bag has 5 although they are not all visible here-they are sticking out, I will add more soil as they grow.

So we have some food, etc stored and we are in isolation. Not much will really change for us except no running downtown for this or that. What we have is it -- so here's hoping its enough. We will still be out puttering around our site - maybe helping the landlord with this or that (at a distance, of course) and we are fortunate that we have a hiking trail not far from us that a very few people use so we can still get out and walk, exercise, etc.

With the travel restrictions we are keeping our eye out for a good deal on a house rental we could slip in because-if there are no tourists, the rents will be cheap on this island... could be a good opportunity for us if we play our cards right.

People in Canada are fighting with each other in the stores - so that has made it across the border. You know things are bad when Canadians are turning on each other. Shelves are already empty, Costco and Walmart - people are hoarding and now selling Toilet paper for $3/roll and it's not the soft teddy bear kind...

Brad just read online that a man was stabbed somewhere in the states over a case of Dasani water and taken away by ambulance. Scary times.

I have more stuff to plant but tonight and tomorrow night are going to be soooommmeeee cold so I will wait. What is planted will be put inside the shed and I will hope they hold on.
Posted by Gone Rogue at 5:00 am