So, since this thyroid issue popped up I have put on what can only be described as -- well, fat. I've gained about 10 lbs that won't go away, mostly around the middle. Because the thyroid controls the metabolism, when the thyroid stopped working the weight added up, and quarantine didn't help. Well, I think they have me more or less back to 'normal' now but the metabolism is still too low and the weight is still on.

Last friday we went to Salt Spring for Brad's 1st weekly massage for months and while there, I went to the hospital to give some blood for the Endocrinologist that I have an appointment with this coming Friday...

Today we both have appointments with our family doctor, great kid (LOL - he's my oldest son's age). I have a lot of things to tell him about, all of which I assume are related to the thyroid issue but since I do not generally make good medical decisions - I will let him be the judge, however I know there is a painful squeezy machine in my future. Perhaps its just old age and my body is falling apart - that is an option, not one I like to consider, but an option nonetheless.

Brad has many, many old grubby T-shirts that he refuses to get rid of (he is a T-shirt hoarder ;D) so I convinced him to part with one and proceeded to cut it up in to 2 inch strips. I then gathered a bunch of my T-shirts and proceeded to cut the seams and sew in a 2 inch strip on each side. This will give me something to wear that will be a little more comfortable in the short term and WHEN this weight comes off, I can just cut out the strips and sew the shirt closed, no one will know the difference. 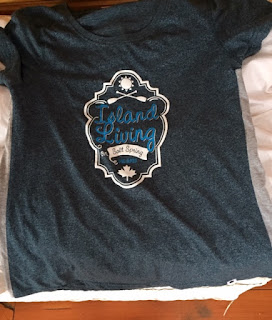 I then went online and ordered some (hopefully) better fitting clothes. No indication as to when they will arrive. Never bought clothes online before and I'm very concerned about the fit.

Our garden is coming along well, although the slugs out here are a significant problem. Sage green with black spots and solid black slugs are everywhere. They love my romaine and broccoli especially. I have found a solution though - COFFEE. I make a spray bottle of instant coffee and spray it on all the leaves after each rain (still raining a lot out here). I didn't spray the potatoes the first night because they hadn't been near them but when they couldn't get at anything else they attacked the potatoes and so now everything gets a spritz of coffee and they are leaving the garden alone.

We had something else attacking our garden and I was sure it was rabbits but the landlord assures us there haven't been any rabbits around here since he ate the last one a long time ago... Then we discovered the Otters, yup Otters. I was sitting on the deck one day and this massive rat ran across the orchard. I only caught a quick look at it and having never seen an otter out of water before I didn't know what the hell it was. Brad thought it was a rat when I described it to him and I assured him that if that was a rat - we were moving! Then a quick google search and I recognized the culprit, however they (family of 4 - we have since learned) don't seem to be bothering the garden. I saw one climb into the cherry tree in the garden once but that was it.

The zipper I ordered for Robbie's bed cover finally arrived (4 weeks from Guelph Ontario) so I also did that while I had the sewing machine out. 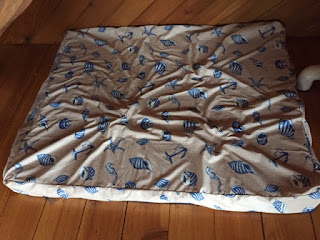 Yesterday, the magnet screen I had ordered for the french door arrived and I promptly set about putting that up, it is ordered to measure and this one (unlike a previous one I picked up) not only fits precisely but is a sturdy good quality one. We also replaced the door handle and deadbolt on the back door as it completely failed the other day. 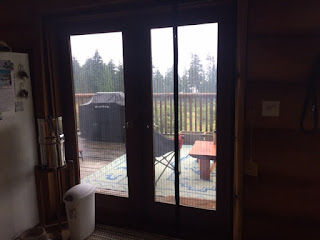 Our neighbour and newest friend, Kane, gave us a housewarming gift, as we had mentioned that we like the one he has on his cabin. So Brad set about setting it up at the front door. 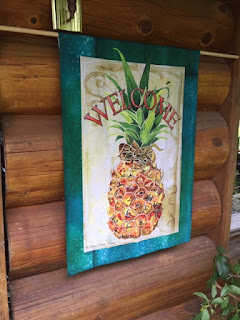 Because we are on a cistern, and this is new to us, we check our water level each Monday. Our cistern is pretty big, 30ft x 10ft and 63in deep. This allows for a total of 9810.42 Gallons (yes, I have a spread sheet so we can follow it and know what to expect next year). When we moved in the water level was 42.5 inches, and this past Monday it was sitting at 42 inches (6540.28 Gallons). We've had a lot of rain since we moved here so the water catchment has been keeping us in water, however the sun will eventually come out... so we are taking precautions (I think I explained this in another post) but essentially and especially because we have a lot of flowers to keep watered we are using water preservation methods... 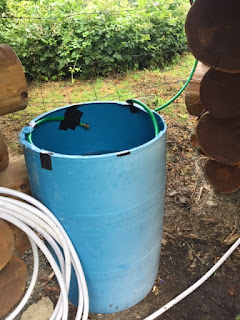 My bath water is pumped from the upstairs bathroom via this green garden hose in to this 55 Gal bucket between the house and the wood shed using a pump we purchased. This water is then used in the front garden. Because my bath ritual is for relaxation and not cleansing (I shower in the mornings for that), there is no soap in this water and it can also be pumped back in to the cistern and recycled through the 3 filters on the system allowing us to reuse it - should that become necessary.

We also do this in the shower, we have a pail in the (very large) shower that we use to catch the water that would otherwise be wasted while setting the temperature of the water and getting ourselves wet. The bucket is then moved out of the way for the lather and rinse, it is strictly for fresh water. It sounds like a lot of effort, but it really isn't. If the shower was a standard shower stall it would be much more awkward but our shower is about 6ft deep and 3ft wide so there is plenty of room. This water is then taken out the back door where I have another 55 Gallon bucket for watering the flowers along the side of the house and the garden we have on the deck. Because the weather has been so bad and the slugs were such a problem and given that the romaine is generally not doing so well in the garden (Quail have also pulled it out of the ground while 'dusting' themselves - don't ask me, I've no idea)... we decided to plant the rest of our romaine, carrot and dill starts in planters on the deck where we can better monitor and control it. We also have 4 strawberry pots and a massive tomatoe plant that I think I mentioned before in a previous post.

Because I know someone is likely to ask, yes we can have water delivered should our cistern run dry at a cost of about $300 for something like 4000Gal. However, no one wants to have to do that so we are challenging ourselves to see how much water we can conserve. We're retired and unemployed so its something to do... LOL
Posted by Gone Rogue at 8:48 am