We managed to get our garden planting finished on Sunday, but then yesterday an order of seeds that I placed weeks ago arrived...... so.... 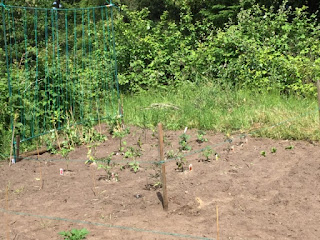 In this corner we have:
Asparagus, Sweet peas, several different Tomatoes and Romaine 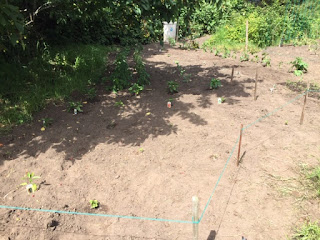 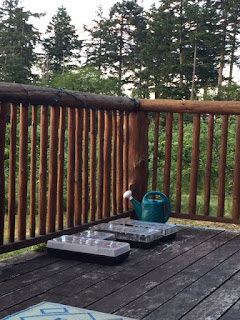 Here I have Sunflowers, Dill, Oregano, Carrots, Onions and Romaine

Not sure yet how we will fit these new additions in as the garden space is pretty full but we'll have to find a way -- especially for the Romaine as we eat so much of it.

We also received an order of 2 cords of wood yesterday and we managed to get a good chunk of that stored into the wood shed before it started to feel like rain so Brad went to the shops for a part for the sink repair (hang on I'll get there) and grabbed a tarp while he was there. Good thing because we barely had it covered when the weather guessers were wrong and it bloody rained!! It will take a few days to get this put away because I am clearly still recovering from my Thyroid thing even if I do feel fine and with Brad's injuries we're a right pair.

Now about the sink. About a week after moving in I realized that the drain pipe under one side of the double sink was not attached (yes, I found that the hard way). We've been so busy with everything else that I was just using one side until we could get to sorting it. Yesterday was sink sorting day, now both sinks drain properly but there is a missing stopper so I'll have to pick that up as each of the two sinks have different stoppers -- no idea how that happened, but.... there you have it. Oh, and the dishwasher, which we don't actually use (not enough dishes, so easier to do by hand) doesn't drain.

As does (not) the washing machine (new washer and dryer expected to arrive on Friday, btw) I am able to do laundry (did it yesterday) by washing in the washer (bang/clang/boom), wringing the clothes out and then hanging them on my laundry line on the back deck to dry for a couple of days. There is a better laundry line in the front (in the sun) but I can't access it yet because the grape vines need to be redirected off the deck so I can get out there and we just haven't gotten to that chore yet. First world problems, I know.

I don't think I mentioned it but I am back to Pickleball. I started back on Thursday and went again on Sunday, today is the 3rd scheduled play day of the week... The club has been very welcoming which is nice, like me they seem to just want to play - not become professional picklers, so that is awesome. Playing with pro wannabe's is stressful, so having a club where everyone just wants to have fun (such as Salt Spring) is fantastic. So the Covid-19 protocols for play require that each player has their own ball and no one touches another players balls (never thought I'd write that on this blog - haha!) This is a pain in the arse but is easily adapted to and its all for fun anyway so who cares?!