Catching up and Veggie Condoms

Its been awhile since I wrote about daily stuff, my last two posts have been about Dr's - you know your old when.

So today I looked at my iPhone (which 99% of my pics are taken on) to see if I had anything to write about this morning and low and behold there were 20 pics since the last one I posted.... so here goes the update. This will clear up June and I can carry on with July as it comes. 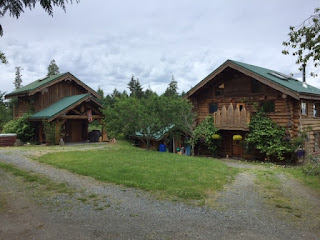 Front yard of our property 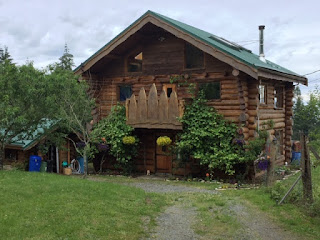 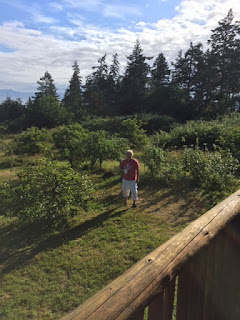 If I have ever seen him so relaxed - I don't recall it!! This property seems to be doing wonders for him

Went to the Saturday market in the north (downtown) part of the island this week and saw this - incredible and creative art. I said to Brad, "Where do they get that many bee hives -- and why haven't they moved?!" LOL 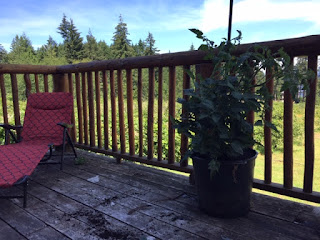 Our tomatoe plant is thriving up here on the deck. We transplanted it into a much bigger bucket and gave it a sturdy pole to climb.

As I've mentioned in previous posts, the slugs in BC are incredible. Huge, thick, slimy.. some are army green with black spots and some are jet black. Both do a number on our vegetable garden. The romaine which we started from seed were ready to transplant and we didn't want to put them in the garden because the slugs would just kill them with slime and munching, so we put them in pots on the deck. However, I still found slugs in the mornings. SO... I set to work with my sewing machine and the summer curtains from our motorhome windshield and made covers for them. 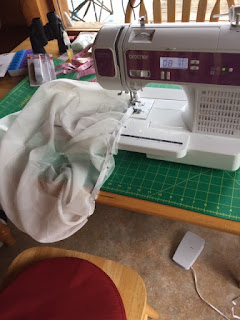 First one... will this even work? 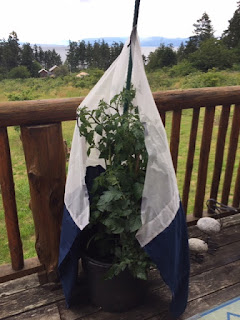 And one for the huge tomatoe 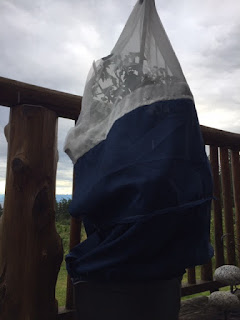 I originally made this with stick on velcro that I then sewed once in place. The sticky ruined 3 sewing needles in my machine so I have since picked up non sticky velcro and sewn that on. This tomatoe plant is very large and the support pole we gave it is about 8ft tall so it needed a wrap, not a pullover. 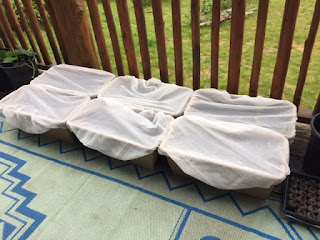 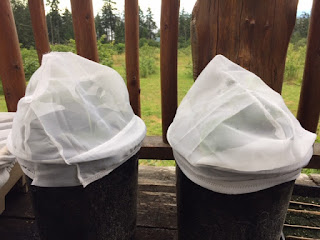 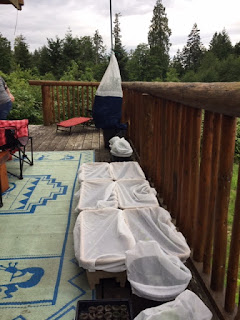 We put them on at dusk each night and take them off each morning, they are loose enough to allow the veg to grow also. I did make some for the garden but they weren't really practical and frankly too small - although I do have an idea to make that work, just need more fabric.

It has been a week and we haven't seen a single slug! The lettuce is growing quickly now also. So they do work. I may just make them and sell them at the market... Pondering.

Note: the ones I made here were just quick throw togethers since I didn't know if it would even work. We thought the slugs might chew through them but they don't. If I were to sell them I would do a much better job of putting them together. 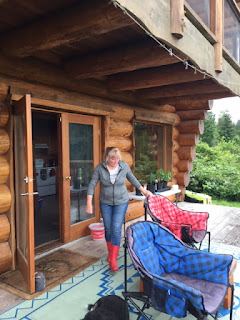 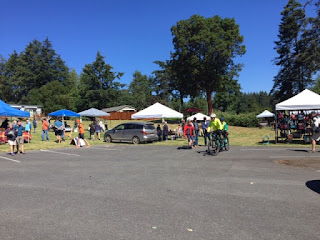 We went to the Sunday market at the south end of the island. This was opening day for this market. 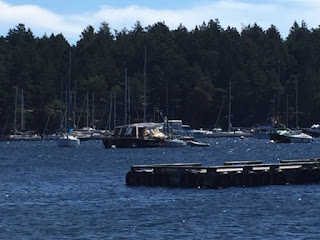 This catamaran belongs to Finding Simon.

I have been following Simon's YouTube videos for about 5 years now after first seeing him on Canada AM with the Mulroney kid. I watched all his videos from the beginning, as I do with everyone I follow. I remember about 3 years ago sitting in our house waaaay back in Hell on the East coast and watching this kid ( he's roughly my sons' age) buy this 50+ ft catamaran for $5K on some obscure island in BC - the catamaran was a complete disaster and he was going to fix it up and tour the world. He is still rebuilding it - as off-grid -- an all electric (solar) boat.

Of course, I never imagined then that we would ever be on the West coast, much less on that same island! We did come to Gabriola when we first arrived in Salt Spring about 2 years ago to give him a mini dehumidifier that we had which was too small for us but would work great in one of the berths on the boat, so we have met him but since moving to Gabriola we been so busy nesting that we haven't had a chance yet to connect with him although he did a live broadcast a couple of weeks ago and I told him we had moved here. Eventually, we will see him I'm sure. 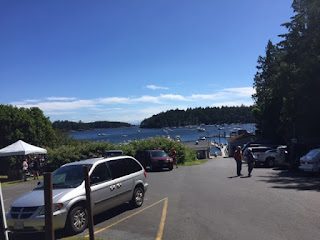 View from the Sunday market

I think I mentioned in a recent post that I have discovered that a foot issue I've had for over a decade is actually Plantar Fasciitis and is quite common. When Brad went to Salt Spring for his massage on Friday he saw these inserts when picking up his prescription so he grabbed it for me. What a game changer. I am significantly flat footed and my feet curve to the insole but this insert actually has me walking mostly on the outer part of my foot. Quite a noticeable difference for sure. I've used inserts before but they were not designed for PF.

Yesterday, while in Salt Spring for a Dr appt, we went to a foot specialist who is making custom orthotics for both of us as we both have different foot issues. The Dr suggested inserts for Brad and since I obviously could use them also, we both went. He will try to have them ready for us next Friday when we go for Brad's massage. Not sure how much longer Brad will be willing to do this 4 ferry trip there and back, especially with tourists. Yesterday we went to the ferry line 70 min early and just got on with only 4 behind us making it.

Because we are on a cistern and depend on the roof for water collection, our landlord brought in someone to clean out the gutters. He has a vacuum with a massive stick and a curve on the end which allows him to stand on the ground and clean them from there. Simple and Ingenious.

Update on travel plans: Brad contacted the courthouse where we need to file the suit about the house problem and due to Covid-19 they are allowing filing by mail. WooHoo, we don't have to drive all the way to Hell and Back! Of course, that means our stuff will have to stay there in storage longer but we can get that anytime. Dad & Ann have postponed their wedding until things sort themselves as they want as much family as possible to attend.

And that's it. All caught up. Whatever will July bring?