The cat was away

Brad went off island for his weekly massage and because it was so hot outside we decided that I would stay home with Robbie. He prefers the comfort of home these days to sitting in a hot vehicle waiting on the damn ferries for hours on end.... good news on that front later in post. 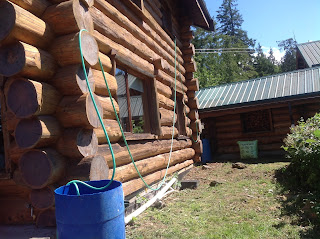 Okay this was already done but (FG will be happy to know that) the bath/shower water is barely enough to cover all of our gardening needs and so nothing is being regurgitated to the holding tank. I have however put in a second hose so we have the option to load the front barrel or the rear barrel depending on water levels. 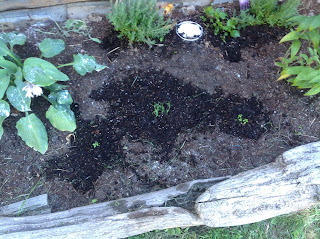 Transplanted some dill to the side garden 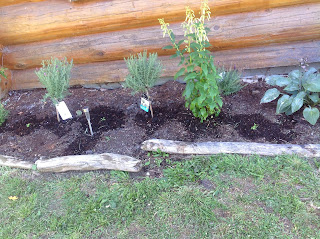 Poppies were finally sprouted so they were planted in the side garden, hopefully they will take there. 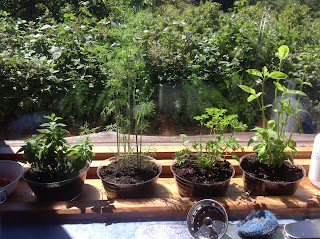 My herb garden in the kitchen window: L-R Oregano, Dill, Parsley and Basil 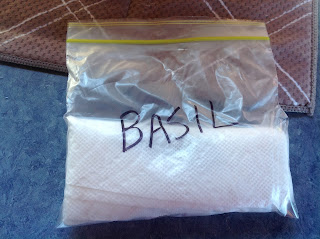 The basil had been so plentiful that I picked some, blanched and froze it for use later. 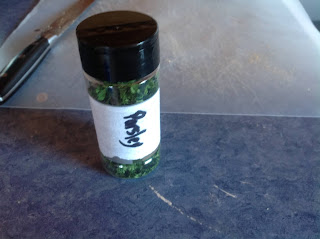 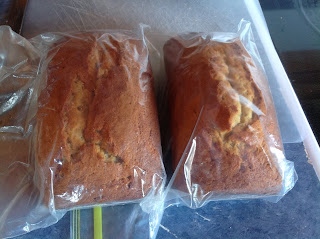 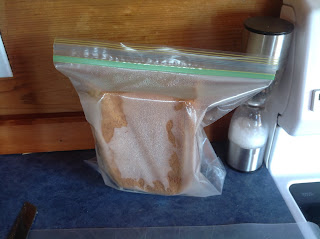 Went out in the orchard and picked a bowl of Blackberries... tried to coax Robbie off the shaded deck but he would have none of it and happily sat watching me sweat in the heat. 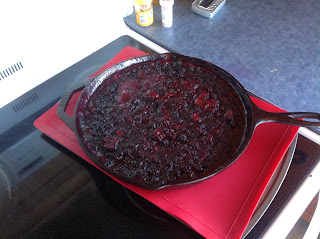 Blackberry crumble didn't turn out as well as I'd hoped. Pie next time. 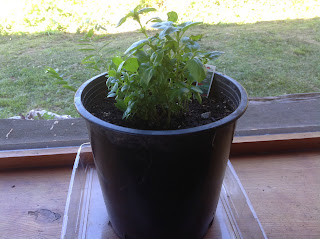 This basil had been planted in the side garden but the slugs had had their way with it and it was not doing well at all. Brad was going to pull it and throw it out but I saved it, transplanted it to this container and put it in the morning sun window. It now thrives. 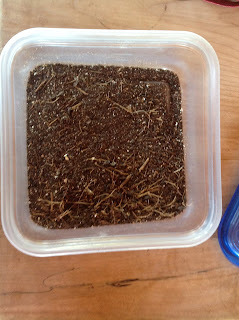 Baked the banana peel and egg shells from the banana loaf, crushed in the blender. This will be used for potassium and calcium on the garden. 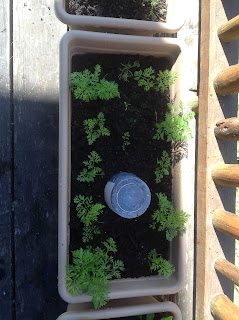 There is a cherry tree down at the garden area and I couldn't resist trying a couple (okay 3) of red ones. Saved the pits, soaked them overnight and planted them in this container with a clear plastic container (from diatomaceous earth) over top to provide a greenhouse effect. Hope it works. 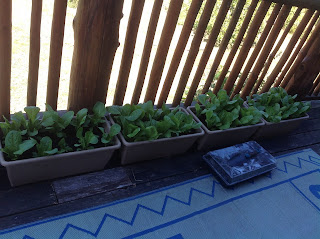 Our deck garden of romaine lettuce was getting large and crowded... 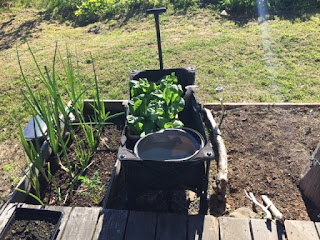 Moving day, romaine are off to their new home

So we hauled it in our handy wagon and transplanted it down in the main garden. I had previously planted some leftover seeds and they have cracked open and are ready to go in to the deck containers. We picked up more soil yesterday and will transplant the seedlings today.

I spent an hour or so cleaning the dog hair out of the Jeep yesterday. Man alive that dog!!! Good thing we love him.

Now about those ferries. The Transport Minister, in his/her wisdom has finally acknowledged the problem of island residents being able to get home with the overwhelming abundance of tourists clogging up the ferries and the risk to said residents of Covid from said tourists. So effective Monday, the ferry will be putting residents first and tourists can fill up whatever space is left.

As an island resident, I can tell you this will be a game changer!! Instead of having to get in line 1.5 hours ahead of expected departure, this should help alleviate those wait times. When you are just going across for a quick to do about something and spend 3x as long waiting in the ferry line, it gets old fast. 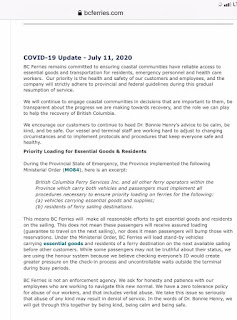 Thank you BC Ferries

Unfortunately, there is no resident proof required. It is being done on the honour system... so it has yet to be seen how effective it will be but here is hoping it makes a difference. Not sure whether it will be implemented on the island side due to space restrictions but hope they can find a way to arrange that too.

Email ThisBlogThis!Share to TwitterShare to FacebookShare to Pinterest
Labels: Baking, BC Ferries, Gardening