Keep in mind that the machine arrived on Wednesday at 2pm. You must allow it to sit for 24 hours before turning it on. And well, that was during Pickleball.....

So Thursday afternoon about 3pm, I turned Betty on (haha). She had to be run through a few tests to make sure the vacuum and freeze functions were working properly, which they were, and we then had to run a bread test.

The bread test is just that, run damp bread through the machine to make sure everything is working properly and this test also removes any residual factory chemicals and smells without ruining any meaningful food items.

Our bread test completed in 7 hours, 35 minutes which is super fast, some people experience a 24 hour bread test, and I had spritzed the bread lightly to try to avoid this... This alternate pump is a major blessing and also makes a huge difference in processing times.

The machine location pictured in the last post was too noisy and so we left the machine off overnight so we could move it in to the kitchen in the morning (this is Thursday into Friday, I'm referring to) 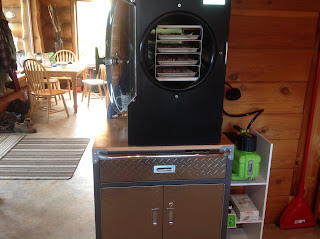 New spot in the kitchen, much more convenient too.

Once the bread test was completed, I ran a load of peppers from the garden (Friday am). They were already prepped (as shown in a previous post) and were awaiting their turn in the Freeze Dryer. I processed approximately a Kilogram (2.205 lbs) of peppers beginning at 915am. At the 4.5 hour mark, I pushed a button and ended up (in my attempt to fix pushing the wrong button) cancelling the entire load and had to run it from scratch... Not quite a waste of 4.5 hours because the machine is 'intelligent' and senses the moisture level - allowing it to shorten/lengthen the drying time as required. The load finished this am (Sat) at 730am. So having to re-process it through the freeze cycle again certainly caused some delay but as this whole thing is new to us, we are still unsure just how much difference that made. 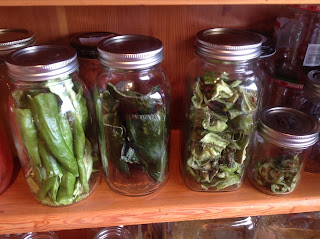 A few different types of Peppers with Jalapeno on the right.

We are having some friends over for Turkey Day on Monday and as the local grocers was out of turkey, Brad went over to Nanaimo to get it. He ended up getting 2 turkeys, one Butterball and one whatever non-butterball kind (I'm a Butterball fan)- so we could freeze dry the non-bb one. He cooked it yesterday and after de-boning, we put it in the fridge overnight.

This morning, once the peppers were finished, I ran Betty through a defrost cycle (2 hours) while prepping the turkey on the trays. The turkeys were put in the Freeze Dryer -unfrozen, at 930am.

Explanation:You can put frozen or non-frozen foods in the machine (but not together). Also there are 3 cycles to the process. Freeze, Dry and Final Dry.

If frozen the machine will then pre-cool for 30 min so you do not put frozen food in to a warm machine - before running the rest of the cycle.

If you put un-frozen food in the machine it will freeze the food for you before beginning the rest of the cycle. (Today's turkey load of almost 2kg took 3 hours to freeze in Betty)

As a general rule, for speed, wear and tear and energy savings, we will pre-freeze whenever possible.

Because I was not expecting to have turkey to FD (freeze dry), the freezer is loaded with the next batch (chicken and butternut soups). I therefore had to put the turkey in Betty fresh and let the her freeze it for me. 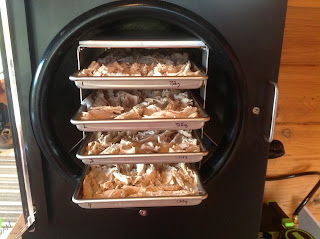 Turkey going in
Look closely and you will see that I have numbered the trays (left) and written the weight of the tray itself (right) on the front of each, this makes weighing so much easier. Weight is important for rehydrating. If something weighs 100g going in and 10g coming out then you know you need to add 90g of water to reconstitute it.

We also put the bones, etc into a stock pot and have made a chicken soup which will later need to be FD'd as well.

I made a rather handy discovery yesterday and that is that the FD trays will hold 2 Ziploc medium bags each. I therefore have filled the next batch of soups into the bags and they are ready to be cut open and put on the FD trays. An extra set of trays is on order and is expected early next week.

So that is where we are at with Betty. Still a learning curve but weeks and weeks of studying and learning from other people's mistakes really helps. As someone on FaceBook said this morning, it becomes like muscle memory and you just know what to do. I think that pretty much sums it up for the most part.

Fortunately, should any issue arise there are several FaceBook groups which I follow where other FDers collect, collaborate and help each other solve problems.

Next up: Taking the turkey out.